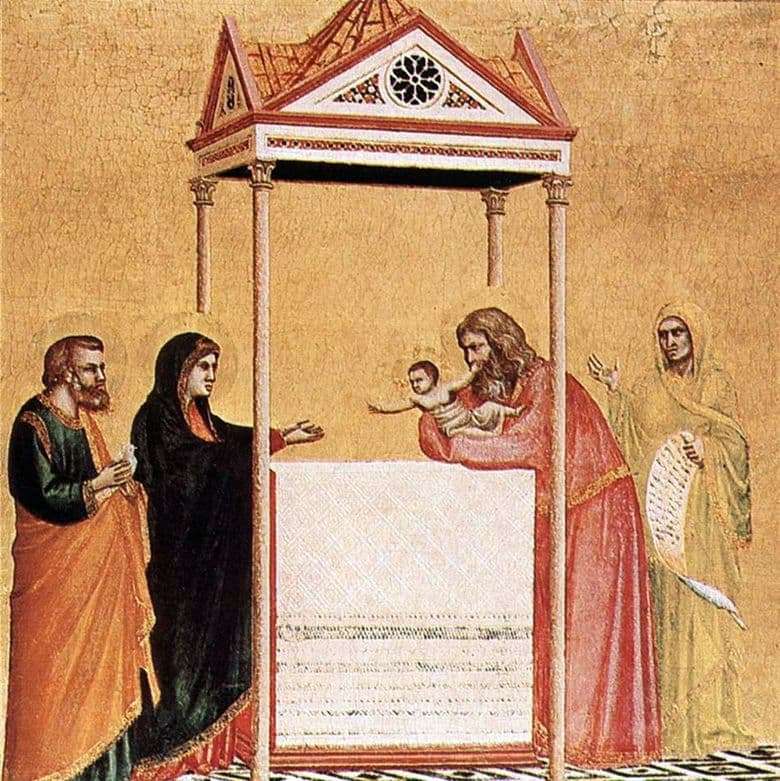 Italian artist Giotto di Bone depicted bringing to the temple of Christ. Giotto is a Western European painter of the Middle Ages. The artist never adhered to the canons of painting of that time. He became the first artist in history who introduced realism into his works.

At the heart of the series of storyline paintings by Giotto are biblical stories. The artist presents them with a high degree of realism in his works. From the first glance, the picture opens its content to the viewer. One can immediately recognize the character and role of the characters, grasp the essence of the action depicted. The composition is multi-figured. The main action is accompanied by several side episodes, which creates a special background to the plot. The image is made in soft warm yellow-orange, purple tones.

The painting was painted in the period from 1320 – 1325 years. To the left of the altar is depicted the young Mary, who with experience and trembling handed the baby into the hands of an old man. The depicted anxious feeling of Mary, gives all the grief of the experiences of Bogamateri for the fate of her child. For Mary stands Joseph, holding two pigeons, as a symbol of the offering to the temple.

To the right of the altar, Simeon the Bogopriyemets, carefully holding the baby Jesus Christ. He stands on the threshold of the New Testament, which he cannot cross. Simeon tells Mary from all Old Testament humanity a prophecy about the weapon that will pass into her soul. The words he uttered became a prayer and are repeated every vespers. The baby pulls out his little hand to his mother, if he asks her to take him away.

Behind the elder stands Anna the Prophet. She has a long scroll in her hand. She observes what is happening with experience and proclaims Mary and Joseph the danger and the need to save the child. Ahead of Mary, Joseph and baby Jesus is waiting for flight to Egypt.