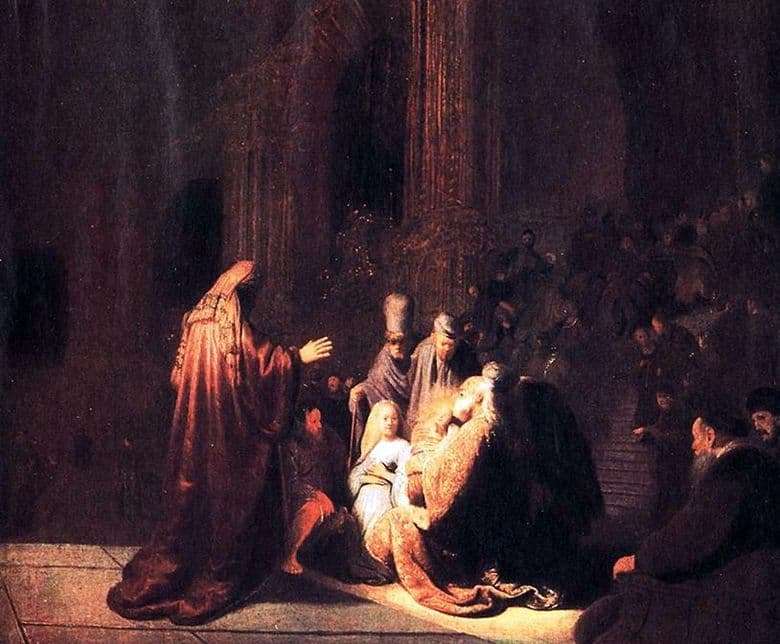 According to the legend, the Elder Simeon could take eternal rest only after he personally saw Christ. The canvas depicts the Old Man himself, the Holy Virgin Mary and little Jesus Christ in the arms of Joseph. The saints arrived at the temple to show Simeon the little Messiah. The main acting characters are surrounded by other inhabitants of the temple, on whose faces delight and joy from the appearance of saints are clearly seen.

In the central part of the picture, the most striking elements are the Holy Virgin Mary, Joseph and Christ. Light emanates from the baby in the arms of Joseph, which illuminates all people nearby. The face of the Virgin Mary is impeccably beautiful, it expresses joy and peace. Saint Joseph carefully cuddles the baby to himself, talking to the Elder. Illumination of the main characters of the canvas seems to tell the viewer that they are the main actors, to whom all public attention is riveted. Using a warm color palette, such as a combination of red, orange, yellow and brown, gives a feeling of warmth and holiness, a warm welcome.

The background of the picture is made in dark black and brown shades, and the interior of the room is extremely difficult to identify and consider among the darkness reigning in the building. From space one can only notice the massive columns weakly consecrated by the light emanating from the crown of Christ. In the right upper part of the canvas there is a group of people who direct all views on the holy child and rush to get closer to the miracle. The mass of enthusiastic people in the temple who worshiped Christ convey the solemnity and originality of the event, which implies the appearance of the Messiah and the Elder’s attainment of the long-awaited peace.