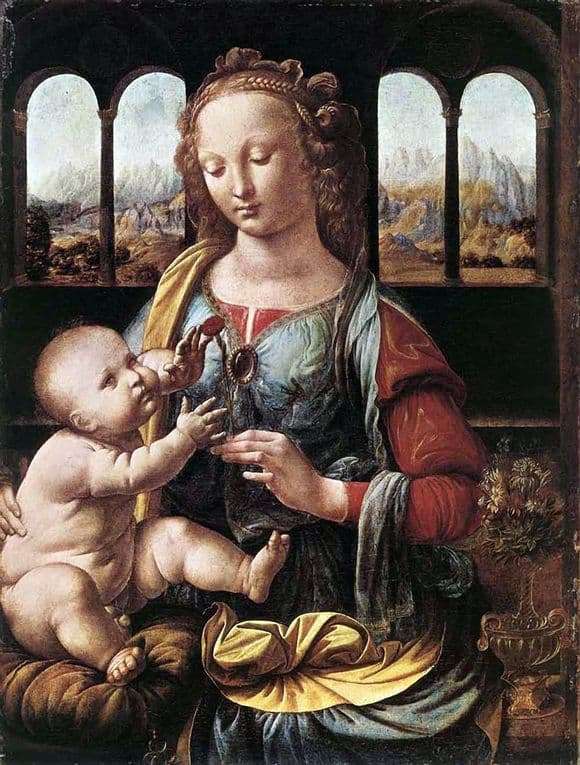 Madonna with a flower by Leonardo Da Vinci portrayed at a young age. At this time, his paintings were influenced by the work of Verrocchio, who was his teacher. This is the first independent creation of the artist.

Contemporary noticed an expressive detail. Da Vinci depicts a carafe of water. He managed to pass the sweaty water as realistic as possible. This is a real find of the painter. A vase of crystal with delicate flowers suggests that the heroine is pure and innocent.

Before us is the Virgin Mary. She is truly beautiful. Her features are truly perfect. The hairstyle of wavy brown hair is impressive. It was she who gives the heroine innocence and charm. The painter pays maximum attention along. Luxurious clothes from expensive fabrics impress with their magnificence.

In the arms of the Virgin Mary, we see Christ. The baby stretches its arms to the flower, which is held in the hands of his mother. This gesture was important. This suggests that the child is completely innocent, and at the same time predicts the crucifixion that awaits him in the future.

Leonardo Da Vinci skillfully uses a palette of colors. The picture is dominated by brown, red and gold tones. It seems that the whole canvas is filled with a special light.

Leonardo creates a canvas on a religious theme. But his Madonna is an ordinary beautiful woman who holds a baby in her arms. If the viewer did not know that this is the Virgin Mary and Christ, he would have thought that he was ordinary people. Da Vinci conveys the most realistic colors. The heroes of his creation come to life. It seems that even a moment, and they will speak.

In the background we see the arches through which you can see the traditional Italian landscape. For Da Vinci, only heroes are important. All other details serve only as the compositional background of his creation. The artist has managed to create a magnificent canvas, which impresses with its purity and tenderness.