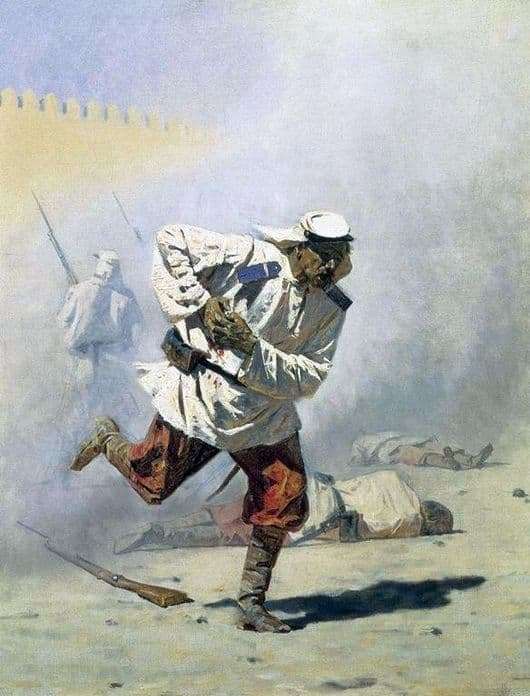 Vasily Vereshchagin is a famous Russian artist, whose talented genius was revealed in the second half of the XIX century after writing a series of paintings devoted to his journey as an assistant to the Turkestan governor in Central Asia.

The world political situation of that time left much to be desired, endless wars were going on, both with Ottoman Turkey and in the expanses of Turkestan, blood was shed, innocent soldiers died, hundreds sent to certain death. Seeing the whole horror of the current situation, the artist makes decisions to write several pictures that, with their appearance, would call people to the world, “Fatally Wounded” becomes one of the conceived canvases. Strangely enough, the exact date of the painting is also known – 1783, as well as the feelings that prompted the artist to take up the brush.

At the top of the canvas, at the very frame, Vereshchagin wrote the following – “They

killed the brothers… they killed!”, These words conveyed the cry of the soul, the main character of the picture – the wounded soldier running from the battlefield. The man in the picture is in despair, which cannot be overlooked by his distorted face and painful effort, with which he covers the wound in his chest at the very heart with both hands.

The soldier’s gun is left behind, he doesn’t pay attention to it, his life hangs in the balance and that’s the only thing. His comrades are dead, their blood has already burned the hot sand, very soon the turn will come and this man, who is trying with all his might to preserve his only property – life.

The background of the picture obscures powder smoke, through which the viewer sees the ongoing siege of the fortress, but for this desperate man, it’s all over, he will no longer fight, and very soon will not live. This is the main idea of this picture – to show the horror of the impending death and cause the viewer, especially the high-ranking one, to strive to end all wars and conflicts.