Home⇒
👍Giotto ⇒
Description of the painting by Giotto di Bondone “The Presentation of the Lord” (1320-1325gg.) 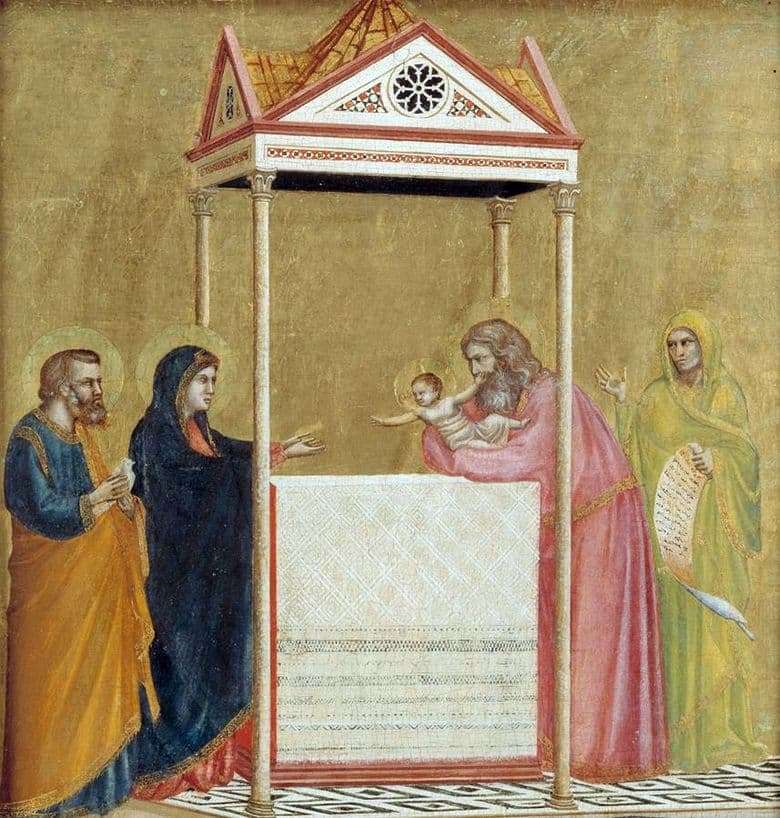 Italian artist Giotto, in his paintings reflected the biblical scenes. “The Candidate” is one of the representatives of the art of Di Bondone. The painting was painted by the artist in the period from 1320g. 1325 to The image is made with a high degree of realism. Giotto was the first of the artists who brought realism to their work. The plot of the image is easy to read by viewers. Perceptible and understandable, become the character of the characters and their role. The composition of the image is multi-figured, but the main plot is clearly visible. The main story is accompanied by two minor episodes. The picture is depicted in warm yellow, orange and purple tones.

According to the law of Moses, the righteous Jewish families pledged to bring their firstborn to the temple for the rite of consecration to God. This tradition was carried out by all after the fortieth day from the birth of the child.

In the image on the left, we can see how Mary reverently presents her baby to Semion. Mary is overwhelmed with anxiety and fear. Her experiences are connected with thoughts about the fate of her child. Behind the Mother of God stands Joseph, who holds an offering to the temple in the form of two white doves. To the right of the altar, depicted Semion taking the child from his mother. The elder is on the threshold of the New Testament, through which it is impossible to cross.

He tells Mary a prediction about a weapon that hurts her soul. The words pronounced by the elder are repeated in the evening prayers, and the most righteous Semion was called the God-receiver. “God-receiving” means – having received Christ the Savior on his hands. The baby Jesus stretches his child’s hand to his mother, as if he wants her to be held in his arms. Behind the old man stands Anna the Prophet, holding a long scroll. On her face you can see the experience. She tells Mary and Joseph of the need to save Jesus. Our Lady, Joseph with a baby in her arms will have to flee to Egypt.