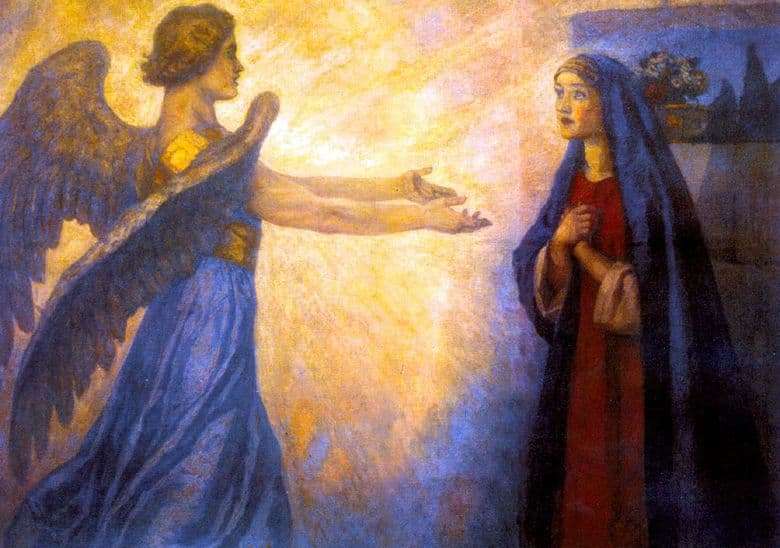 As the name implies, the picture is dedicated to one of the biblical scenes. The picture tells us about a very important event for the religious world: the Archangel Gabriel arrived in Nazareth to the Virgin Mary to tell her the good news – she will be the mother of the Savior of the world, that is, Jesus Christ.

This religious story is considered very popular among artists. This work of Surikov did not receive much popularity due to the simplicity of the image of figures. We see a very frozen scene, no sense of movement. Archangel Gabriel stretches his arms to a woman. It is noticeable that the artist worked very well on the image of the hands of the archangel – they are muscular, strong, visible relief. The male figure has a simple blue dress with gold trim. An important part of the work is the image of the wings of the archangel. There is no customary white color associated with angels. The wings are made of pure gold. But there is no special scope in depicting the size of wings, there is no usual exaltation of the messenger of God. Only the bright light that illuminates the room attracts attention when Gabriel appears.

Most of all critics received exactly the image of the Virgin Mary. The artist abandoned the familiar symbols of the Annunciation: we do not see either the lily or other religious subjects, for example, like the Bible. Virgin Mary is depicted in full growth. Her hands are folded near the chest. The woman is dressed in a red dress with white sleeves, over which a blue cape is worn.

Especially pay attention to the image of the woman’s face. It is very difficult to understand what emotions the artist tried to convey. Here you can see the joy, surprise and humility. Attract the attention of the big eyes of the future heroine.

Behind the woman is a stone wall, which indicates to us that Gabriel found Mary in the room. Right behind the figure of Mary, on the wall, hangs a small picture of a rectangular shape. Supposedly, the picture shows a landscape with flowers.