Home ⇒ 🎨Giotto ⇒ Description of the painting by Giotto “Resurrection of Lazarus” 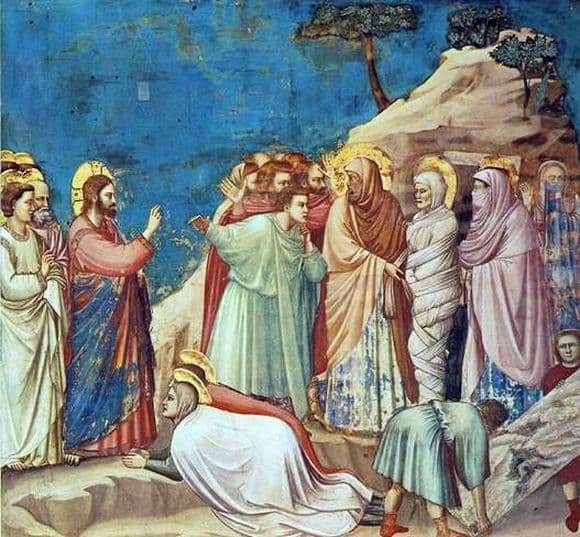 In most of his works, the artist Giotto often chose this kind of multi-figured compositions, in which a lot of incidental episodes accompanying him were attributed to the main plot. As it may seem at first, a superficial glance, all these side episodes and plots are so insignificant and small that some may have doubts about the advisability of displaying them in a picture.

However, later, after a detailed inspection, it becomes clear that the small plot episodes displayed near the main one create an exceptional background in terms of significance, thanks to which the picture is not only beautiful, but also alive.

And here, in this picture, the greatness of Christ is revealed, which are emphasized by the faces of every person who is present during the miraculous ascension of Lazarus, full of excitement and amazement.

The drama in the storyline reaches its highest point of tension in the place of the work, in which the sisters of the main character, Lazarus, who have fallen into submission on their knees are depicted. Maria and Martha bowed, in their gestures and on their faces are the feelings of witnesses of this wonderful action. But most of all the drama and humility is gathered in this picture in the figure of Jesus and his outstretched hand.

Here, as in all the works of the artist Giotto, each person appears as if at the center of this unusual religious event. The figures of the characters of Lazarus and Christ were slightly moved by the artist to the edges of the overall composition, so the center goes to the witnesses of this miracle. And there are a lot of emotions in the picture, starting from superstitious fear and ending with the deepest shock and humility of what is happening. All this can be seen on the creative work of the artist after her inspection or after a long study.