Home⇒
👍Monuments ⇒
Description of the monument to keyboard in Yekaterinburg 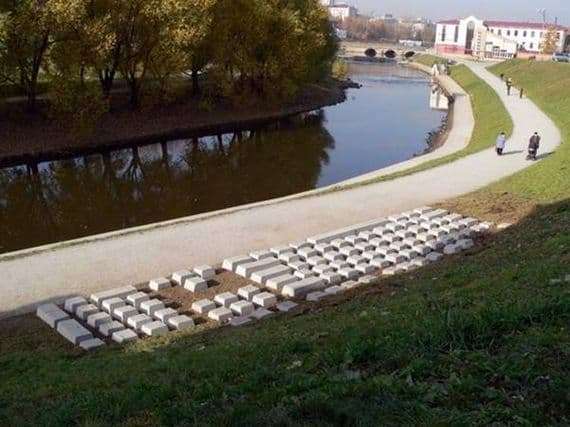 If you are lucky enough to be in Yekaterinburg, then begin a sightseeing tour of the city from the keyboard monument. Yes, yes, yes, it was she, now almost native in every home, a computer keyboard, in 2005, a place of honor was given.

Initially, the project of Anatoly Vyatkin was timed to coincide with the festival on the history of Yekaterinburg, but he did not acquire from the officials either status or recognition. But the townspeople and tourists amusing architectural structure obviously had to soul. The idea turned out to be so urgent that by 2011 a monument to the keyboard was included in the top ten visited sights of the city.

So what is he like? This is a thirty times enlarged copy of a conventional keyboard. Each button is similar to the one we see daily before our eyes. Letters, signs, Shift and Enter, the spacebar button – choose and admire. In total, the construction of 104 keys, cast from concrete. The area under the monument is 64 m2.

In the classic version, we cannot call the monument to the keyboard a sculptural composition. This is largely a tribute to communication, which is emerging at the present stage to a new level. The keyboard acts as a symbol of unity of people. An uncountable amount of the world’s population spends hours every day behind the keyboard, be it work, computer game or email.

Each key in the sculptural composition appears as an improvised bench, especially since the monument is logically inscribed in landscape design. Companies of young people are happy to stop here to dream on the letter “A” or run through the three-meter spacebar. Residents dream to complement the composition with a computer mouse and monitor.

Monument to the keyboard has an attractive and fascinating effect, leaving few people indifferent. This is a kind of cultural phenomenon that can provoke and amaze.