Home ⇒ 🎨Monuments ⇒ Description of the monument to the crocodile in Izhevsk 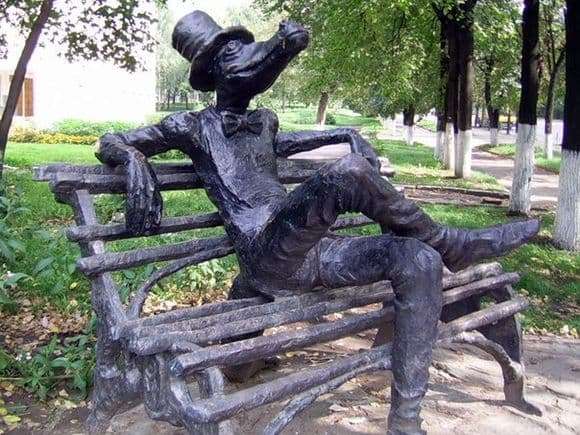 Our country is rich in fabrications and various interesting sights. Here is a monument to a crocodile in the city of Izhevsk is a clear confirmation of this. It was installed a little more than ten years ago in 2005. The monument was supposed to appear as a gift to residents by the day of the city, but could only be installed by the end of September.

This eccentric monument adorns the place in front of the gymnasium number 24. Why, in general, does he “sit” there and why does the crocodile? The fact is that the city authorities gathered a meeting of various figures and organizations about the pedestal, which would be an ornament of their city, would give it fame. They wanted to decorate the faceless place.

It was decided to create a monument not the same as Tsereteli had built before. It was supposed to be ironic, pleasant, in the modern style of the type of a monument to the letter “E” in the city of Ulyanovsk. Invented such a crocodile student, embodied the plant and sculptures Pavel Medvedev. The result was such a crocodile, which really became a local landmark. Now the newlyweds come here for a wedding photo shoot.

According to one version, the plot was chosen for a reason. The figure of a crocodile is cast because allegedly at the beginning of the 20th century it was mentioned how a crocodile swam in the rivers of the city. Locals were even afraid of the dragon. Whether this is true or not, it is no longer known, but the fact remains.

Now, the locals are not afraid of the crocodile, they are proud of its presence in their city. But the truth is that the serious faces of city streets sometimes look so dull, traditional and familiar. And with the presence of such interesting objects, life becomes brighter, because, passing by such a sculpture, I want to smile.