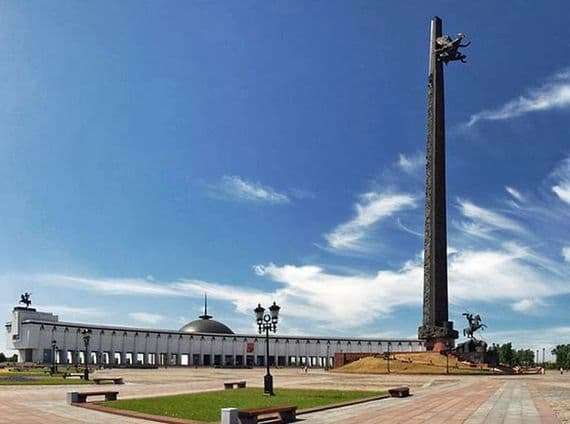 The Victory Monument on Poklonnaya Hill in the capital is located on Victory Square. It has a height of over 140 meters. The monument is opened on the honor of the 50th anniversary of the Victory. It is the highest memorial building in all of Russia. Design and construction of the monument took many years.

The height of this monument was chosen very well. Each decimeter height corresponds to one day of the Great Patriotic War. So the monument has a height of 1418 decimeters.

The shape of the obelisk is a triangular bayonet. It is covered with bronze bas-reliefs.

For the Victory Monument was selected special steel. It is reliably protected from corrosion. At the top of the stela is a bronze composition weighing 25 tons. It is attached at a height of 104 meters. The composition depicts Nike – the goddess of Victory, as well as two cupids. The total weight of this structure is a thousand tons. However, this statue added instability of the whole monument, so 2 thousand tons of concrete was poured under it.

Due to its features, this monument is specific. But at the same time, it is unstable in terms of aerodynamics. The model was blown in a special aerodynamic pipe. To prevent oscillations from strong winds, the developers equipped the Victory Monument with special aerodynamic dampers. The main such absorber weighs about 10 tons.

Victory Monument stands on a hill. Inside it are the premises where the station is located to monitor the status of the monument, as well as ancillary equipment.

Victory Monument refers to the whole monumental complex, occupying 135 hectares. The memorial structure includes the Museum of the Great Patriotic War, the monument itself, as well as three churches. Near the specified museum there is a unique exhibition of different techniques of the war years, as well as thematic sculptural compositions.