Home ⇒ 🎨Monuments ⇒ Description of the monument to the postman 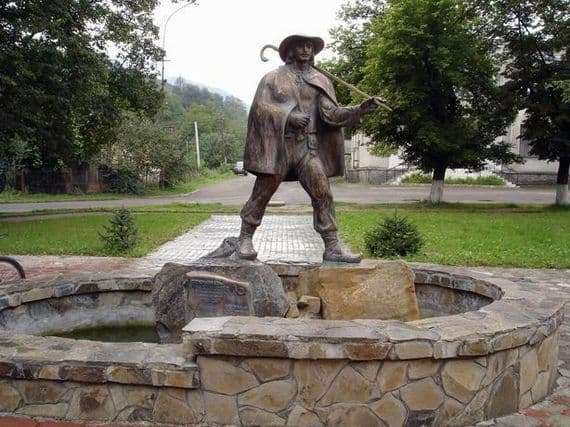 Most of the monuments are established by famous people who managed to leave a mark on history and became famous for their actions or contribution to the development of society or science. But few monuments glorify the lives of ordinary people who have done their work responsibly, put their soul into it, but did not become famous (and were unlikely to strive for this). For example, are there many monuments to postmen? The answer will be no. But still they are. For example, a monument to the postman is installed in the Uzhgorod region, in the village of Perechin. Here, the memory of the rural postman decided to translate into a beautiful monument.

It is interesting that the monument celebrates not the profession in general, and the life of a particular postman Fedor Fekete, who lived and worked in the village. The monument is a person’s figure in full growth. The idea belongs to a local sculptor Michael Belen. Inspired by the architect created a monument to the life-size bronze. The monument depicts a postman Fedor Fekete, who crosses from stone to stone and is a long-awaited letter villagers.

The postman won this honor for a reason. Fedor lived in the village in the 19th century, when this territory of the country was part of the Austro-Hungarian Empire. Every day he traveled about 10 km from his village to Perechin to bring mail in time. Fedor overcame forest trails and rivers so that everyone would receive news from relatives and friends. After the postman’s death, the villagers made a memorial inscription on the wall of the church.

Today, the postman’s monument is a local landmark, which tourists and locals come to see. The monument looks very harmonious against the background of the local nature. It seems that the postman will now take another step and say, “You have a letter, dance!”. Such monuments remind us that ordinary people sometimes do things for us that are much more important than those who have the power and authority.