Home ⇒ 🎨Monuments ⇒ Description of the monument to Chekhov in Tomsk 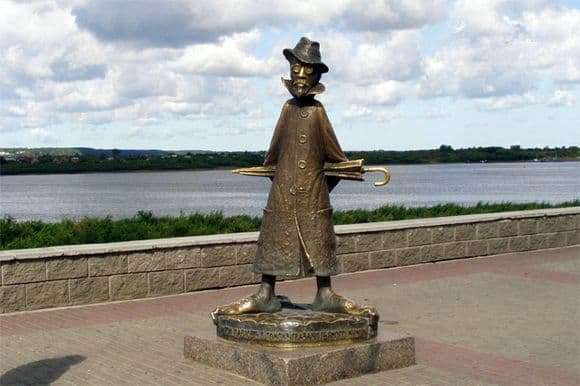 In Russia, there are many monuments. But there are among them the most popular. Why it happens? Judge for yourself.

Popular monuments can become when they evoke emotions in people. Well, how can you get past such a pedestal, as a monument to Chekhov in the city of Tomsk. If you have not seen him, then in your imagination a serious monumental man who is immortalized for his writing talent is immediately drawn. And no.

The monument to Chekhov portrays the writer as quite comical, with sarcasm. And the reason for this “resentment” of the residents is that when Chekhov was in their native and beloved city, he spoke extremely unflatteringly about him.

Tomsk seemed to him a place of drunks, mud and muddy. He did not stint on the words. Well, after more than a hundred years, the townspeople decided to give themselves such an original gift for the 400th anniversary of their homeland. At the same time, they collected funds for it themselves.

Of course, this monument is not everyone likes. Someone says that this is blasphemy, because in this way, according to Protestants, the memory of a great person is defiled.

Others, on the contrary, consider the monument to be a great attraction. He is especially loved among students who come to rub their nose before passing exams. Why is it shiny now?

Of course, such an original approach to the city sights is not all of the authorities. But Tomichi were not afraid of anything and expressed their opinion to the writer about their native Tomsk. And this has its own truth. After all, for everyone the Motherland is a home, and it is the best.