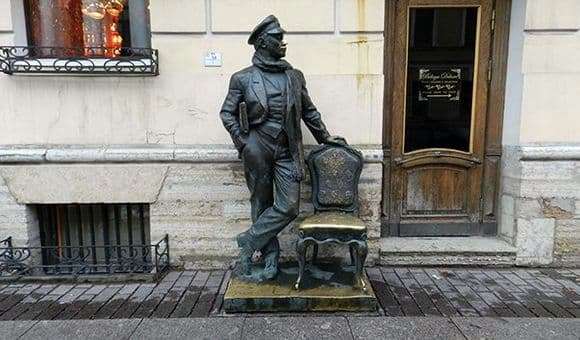 Probably, there is no one among us who, at least once in his life, has not watched the famous film, which has already become a classic of the genre – “12 chairs”. We all know the main character Ostap Bender. He also became famous in the film “Golden Calf”.

Ostap Bender is a character that will leave few people indifferent. Someone wants to be the same inventive, ironic, resourceful and keen on the mind. Someone hates the main character. Which, by the way, was reflected in the opinion of many residents after the monument was built. And it is located in St. Petersburg on the Italian street.

Ostap Bender was installed in this place in 2000. Such an event was made for a reason. After all, the hero of the work is 100 years old. That was why it was a pleasure to perpetuate his decision, because whoever said that, but agree, for sure, Ostap Bender does not leave anyone indifferent. There is also an opinion that the hero of the piece had a real prototype.

It is noteworthy that the monument was installed at the eponymous restaurant, which is currently no longer there. But the monument to the expressive Bender with the features of the actors who played his role in the films stands and pleases for the second decade. This is a local landmark, which attracts a lot of tourists. And, of course, there are signs that people really believe in. What can be seen on the rubbed nose of the monument.

After all, it is believed that if a person has any plans, perhaps even adventurous, then rubbing his face, namely, Ostap’s nose can not be worried. After all, the result will be positive. The same applies to the chair, which, incidentally, was also immortalized, because what kind of Bender without a chair with diamonds. After sitting on it, you can count on success. Here is a popular belief has developed over the years.