Home ⇒ 🎨Monuments ⇒ Description of the monument to orange in Odessa 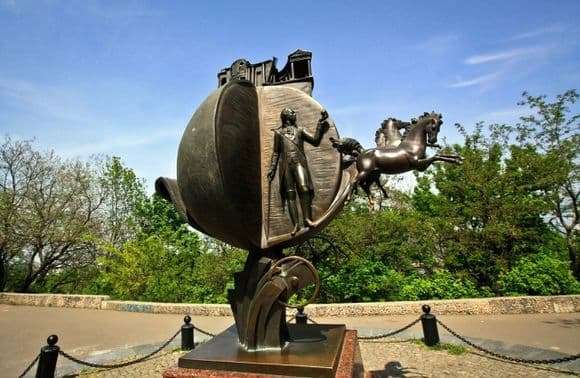 The idea of ​​creating such an unusual design belongs to Valery Balukh, and the practical work was done by architect Vladimir Glazyrin and sculptor Alexander Tokarev. The width of the entire composition is twelve and a half meters in diameter. It is made of granite pavers.

Enclose the construction of the columns of cast iron. Interconnected by chains. At first, the pedestal was located on Lanzheronovskaya Street, and two more pillars entered it, which designated versts from Odessa to St. Petersburg. But after transferring the construction to Zhvanetsky Boulevard, they were not installed.

The transfer of the monument was carried out because the names of the former rulers of the country are engraved on the side of the orange. And it was decided that the monument destroys the historical environment of the city.

A pedestal with an orange cast in bronze was placed in the center. On the one hand, the peel was removed from it and several slices were taken. Inside the fruit is molded a statue of the ruler of the country Paul the First. In addition, this design included a troika drawn in horses orange. And on top are the famous buildings of Odessa: Opera, Vorontsov Palace and the Cathedral of the Transfiguration of the Savior.

This sculpture symbolically shows the transport of oranges from the city of Odessa to St. Petersburg. In order not to burden the fruit with buildings, all buildings on it were made of bronze bars one centimeter thick. Therefore, the construction of the part turned out the outline.

Fully sculpture cast in Kiev, she went to a ton of bronze. Such a construction is worth about twenty thousand American dollars. Moreover, the construction and installation had costs of 160000 hryvnia. All installation work began in 2004 in early August. Many raised funds through voluntary donations from citizens.