Home ⇒ 🎨Monuments ⇒ Description of the monument to Levsha in Tula 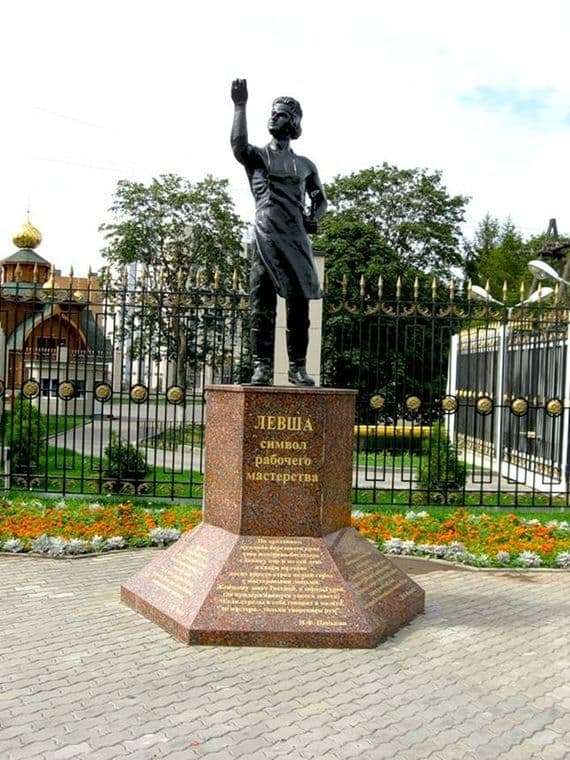 In 1881, the Tale of the Tula Oblique Lefty and the Steel Flea (Shop Legend) was first published by Nikolai Leskov. The story tells how a simple artisan Lefty grounded a flea made by English artisans, much more than his skill.

The pride for the ingenuity of people, captured in the story, fell in love with readers and became a symbol not only of Tula artisans. This is a kind of symbol of Russian craftsmen, who were famous for our land at all times. More than a century later, in 1989, Bronislav Krivokhin created a monument to Levsha, which today stands in the historical part of Tula, on the banks of the Upa River, as a symbol of Russian artisans.

Lefty’s bronze figure is simple and concise. The author managed to clearly convey the image of the working Russian people. He is short, stocky, with muscular arms, strong torso. The wide chest is slightly covered by a special working apron. In his left hand he holds a hammer, as a symbol of labor.

Left-handed is shown at the time of admiring the finished work. His head is slightly raised, his gaze is directed at his right hand, in the palm of which there is a savvy miracle. And although the flea is not visible, we know for sure that in the hands of the master.

The sculptor managed to create a textured simple face: an open forehead, curly hair, a straight nose, a slightly heavy chin, typical of Tula artisans. The nature of the eyes, their expression is clear and lively, one feels that the eyes really see the miniature masterpiece created. The unique facial expression conveys the inner state of the hero. The whole figure radiates positive, contentment, pride.

The Monument to Levsha is located on a two-meter elevation. The pedestal is made in the shape of a hexagon, similar to some kind of fastener. Each side is decorated with a quote, including from the story Leskov.