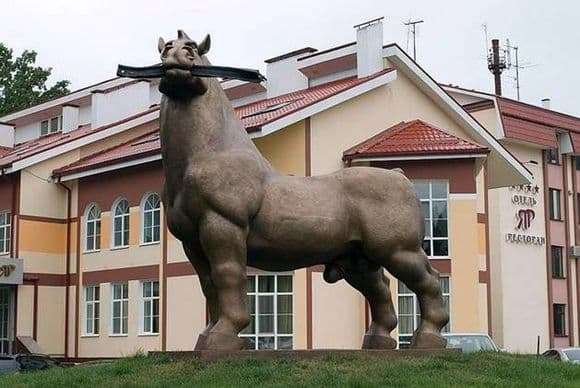 The originality of our country can be envied. Russian people have always been famous for their unusual mentality, which often cannot be understood by other countries. Each country has its own monuments. Some of them personify victories in wars, others praise great people, some of them are symbolic, fourth original. The latter are increasingly popular.

One of the most controversial monuments in our country is the horse in Voronezh. It causes a storm of emotions in all who look at him. Residents are trying to explain a very peculiar kind of this animal, which does not fit in their heads with a noble horse.

Yes, indeed the horse, by the way, made by a Korean, but with a Russian name, has an ambiguous appearance. Many say that the author never apparently saw the horses. Especially all the indignant back of the horse and the rail in the mouth. And no matter how hard the horse tried to find the breed, but none of the known ones still have such individual data.

Why it was not possible to take any breed as a basis and create a sculpture on it, it is not clear. But, as you know, creative people very often seem strange to everyone else. They have their own unusual views, even on the most standard things. Why are only many paintings by artists who are not sold to any logical explanation.

But no matter how absurd the horse looked, its customer, the owner of the hotel, remains very pleased. She wanted to see a sculpture next to her establishment, which, according to her, should personify this place. With regards to the rails, its purpose in the mouth of the horse symbolizes, in the opinion of the author and the customer, the struggle of nature with a heavy age of metal and technology.

What to say?! There is no limit to human fantasy. And the horse in Voronezh only confirms this. And if the monument is supposed to evoke emotions in people, then the horse could definitely do it one hundred percent.