Home ⇒ 📌Monuments ⇒ Description of the monument to dumplings in Izhevsk 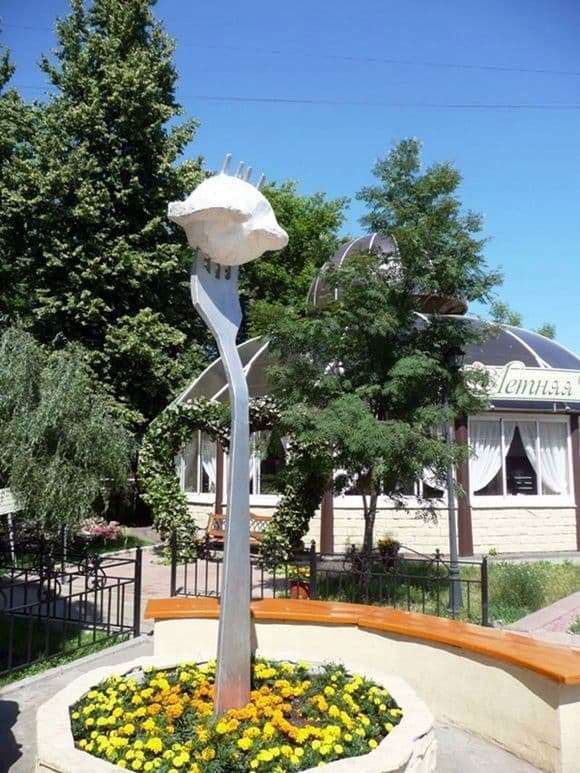 A funny sculpture was installed in Izhevsk on the Regional Street on October 28, 2004. Such a monument appeared after the results of the competition “Modern urban sculpture” were summed up. This competitive holiday was held under the leadership of the Archeopteryx group and the Creative Dacha gallery.

The winner was identified sculptor Alexei Shklyaev. The construction of the young artist has a large size: one meter in diameter, and three in height. The young artist creates his own project, which is called “Monument to dumplings”. He explains that Udmurtia is considered the birthplace of this beloved product.

If you translate a word from Udmurt, it will sound like “bread-ear”. Alexei Shklyaev, when he studied in Moscow, always recalled these Udmurt dumplings. And in the capital they are completely different.

He thought long and hard about keeping his memory for a long time about it. According to his project in the city should be a space that has many images that are associated with dumplings. For example, you can stitch t-shirts with its logos, make icons, perform sculptures and much more.

The monument itself consists of a fork, on which a large dumpling is planted. It is installed near the most popular in the city restaurant “Pozim”. People who have looked at such a sculpture immediately have an appetite, so there are always many visitors in the restaurant.

According to the authors of the idea, not only tourists, but also newlyweds will come here. Since the energy field of their sculptures is very strong. Yes, and dumplings in Udmurtia are considered a wedding dish. They are made in large numbers to wish the young good and happiness. And over time, around the monument and the restaurant will be held festivities and city holidays. This monument has set points on the map, where the favorite dish has come from.