Home ⇒ 🎨Monuments ⇒ Description of the monument to the water carrier in St. Petersburg 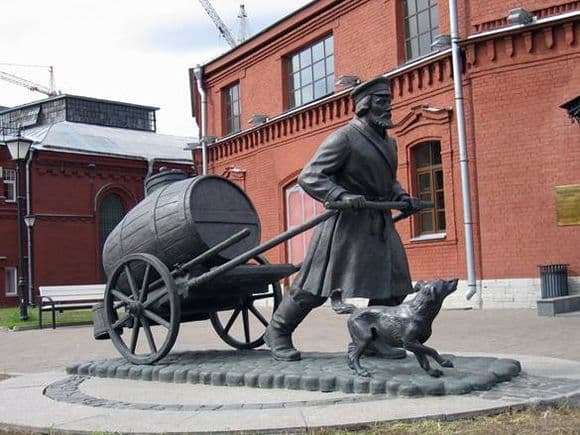 This is a very famous monument, which stands in St. Petersburg next to the tower on the set of water. The monument itself was installed in 2003. The tower is much older, as it has been here since 1863. It is considered a monument that belongs to the industrial architecture of the 19th century.

The history of the water carrier is as follows. Previously, the cultural capital lived in a completely different way than it is now. There was no water, usual in our time for everyone, in people’s homes. And they received it thanks to no one else, like this water carrier. They took water from the river. And yes, in past centuries, the water in the rivers was clear, and people did not poison it. So, the water carrier, having gathered a barrel, began the hard way.

Labor is a burden, for it was necessary to carry the burden all over the city, where there were uneven paths. What the authors did not forget to indicate under the monument. And the volume of the barrel was also impressive, because water required a lot. Of course, such a burden should have been drawn at least by a horse, and the water carrier would manage it. But in those days it seemed normal.

Water carrier decided to portray in full growth, before it runs a true friend – the dog. The authorities decided to perpetuate the plot as a tribute to the post. What can not but rejoice. Also worth noting is the fact that the water carrier was created in accordance with the traditions and appearance of those years. For this sculpture well studied photos and all the data.

The era of water carriers passed when in 1958 the emperor decided that water should flow in the city. Soon a tower was erected, which stands in this place to this day. But we still remember the work of the water carrier, thanks to such a monument.

And it was in this place where the tower was laid, the authorities considered it symbolic to erect this monument. He became known throughout the country, and many come to the northern capital to look at various sights, including the monument to the water carrier on Shpalernaya Street.