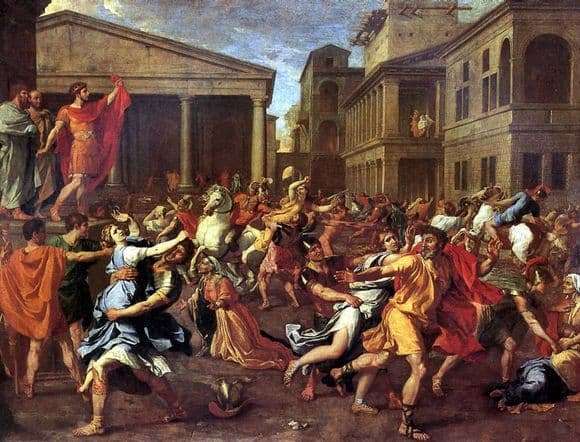 According to Roman historians, only men lived in Rome. The tribes living in the neighborhood did not want to give up their daughters for the ordinary poor. Then one of the founders of Rome – the legendary Romulus, comes up with a cunning plan. He arranges a grand celebration and invites Sabineans to it. They accept the invitation and come to the city with their families and daughters. Then the Roman residents pounced on the guests, and taking advantage of their disarmament, they began to kidnap young girls. After this, the war began, which lasted for many years.

Sabineans broke into Rome under the command of King Tatia. This led to the fact that the Romans began to lose, and soon fled. Then Romulus began to cry out to the gods to help bring the fugitives back. At this point, the Roman women, already in time to love their husbands and bear children, rushed to the battlefield and began to beg to stop the war. Thus, the Sabine women put an end to enmity, since the tribes finally united, and began to live in a single state. Simple women saved the ancient city and prevented the death of thousands of men.

Nicolas Poussin was well versed in ancient art and was a great connoisseur of history. The artist was a representative of classicism. This dynamic picture depicting a historical moment was written by him for Cardinal Omodey, who was a real collector and connoisseur of unique canvases. In the plot of the picture a talented artist beautifully expressed anger and rage of what is happening, where a quick declaration of war is apprehended. On the canvas depicts Romulus, watching the Romans kidnap girls and take them from their families. This work is in the Louvre and is a painting of the eighteenth century.