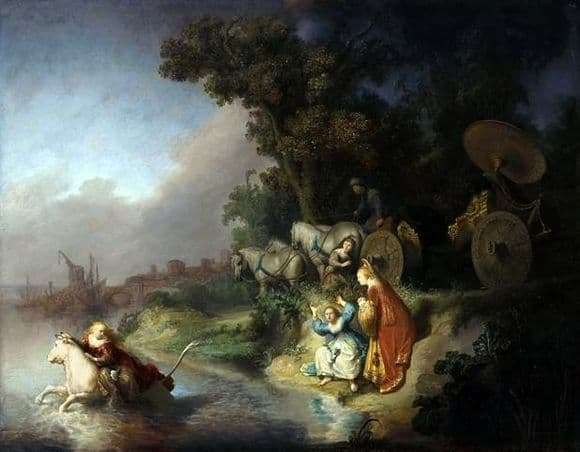 Many artists were worried about the mythological plot about the abduction of the beautiful Europe by the treacherous Zeus. Dutchman Rembrandt shows the audience his vision of a famous myth.

“The abduction of Europe” was written back in 1632. The young painter was influenced by the master of black and white contrasts – Caravaggio. In the picture, highly illuminated areas are clearly distinguishable. This is a girl with a bull disappearing into the depths of the sea and her two terrified friends on the shore. Rembrandt highlighted the key figures of the plot with light.

A distinctive feature of the performance of the myth by the Dutch master is the filling of the picture with rich emotional content, while the philosophical idea itself goes to the background plan.

The traditional Italian painting story is familiar to almost everyone. The girl Europe sees a disturbing dream of separation from her native lands.

Waking up and dismissing the unpleasant night vision, she and her friends go for a walk in the flower field. There she falls in love with a strong Zeus. He decides to lure the girl cunning – turns into a bull.

Peaceful temper, he enchants friends and luring Europe to sit on his back. Then he rushes headlong to the shore and dives into the waves like a fish.

The abducted beauty in horror glances back to the girls on earth. The same wring their hands with fear and grow stunned with surprise. Subsequently, she expects a successful life, but now only panic and indignation can possess her soul.

Rembrandt’s work is superbly detailed. Huge trees, grass, bushes are painted with great care. Much attention is paid to the clothes of the heroines: the dresses embroidered with gold are sparkling with pearlescent shine.

The secondary figures – the driver and the lady are infected with the same emotions of general panic. In the distance, urban buildings disappear into a misty haze, residents are unaware of an extraordinary phenomenon.