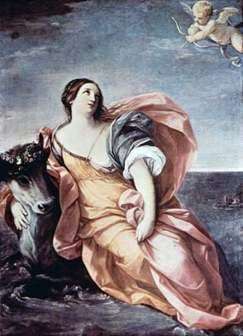 In the visual arts of the whole world, great importance is attached to ancient mythology. One of the most interesting ancient Greek legends is the story describing the abduction of a beautiful girl named Europe by the king of all gods on Olympus Zeus. The great artist Renee Guido presented this plot and portrayed it in his magnificent manner of execution.

The Greek god Zeus always was not indifferent to the beautiful female beauty, therefore, having seen the young daughter of the Phoenian ruler Europe, he lost his head and wished with all his heart to possess it. Europe bewitched him with her beauty, ready to be compared only with the goddesses of heaven. When the girl made a carefree walk surrounded by her friends, the treacherous Zeus decided to steal her. He took the form of a big bull and went to a cheerful company. Girlfriends began to decorate the horns of an animal with wreaths of flowers and took him into their game.

Europe, the most daring of girls, climbed onto his back, not knowing who actually stands before her. Then Zeus decided to fulfill his plans and threw himself into the depths of the sea, taking the beauty with him. He crossed the sea and landed Europe on a distant island called Crete, where the girl gave him three sons.

In the picture, the viewer observes the scene when a god dressed in animals swims on the water surface. Its wool is gray, and the horns are still decorated with flower garland. The girl saddling the bull lifted her eyes to the heavens, where in the right corner of the canvas is Cupid with her arrow loaded in the bow. The European robe emphasizes the feminine silhouette of her body and falls in deep folds. The pinkish cape and hair of the girl develop in the wind, which transmits the restless weather of the sea.

The painter Reni Guido depicted this scene on his canvas in the middle of the XIX century. When working, he used oil.