Home ⇒ 📌Tintoretto ⇒ Description of the painting by Tintoretto “Abduction of Helen” 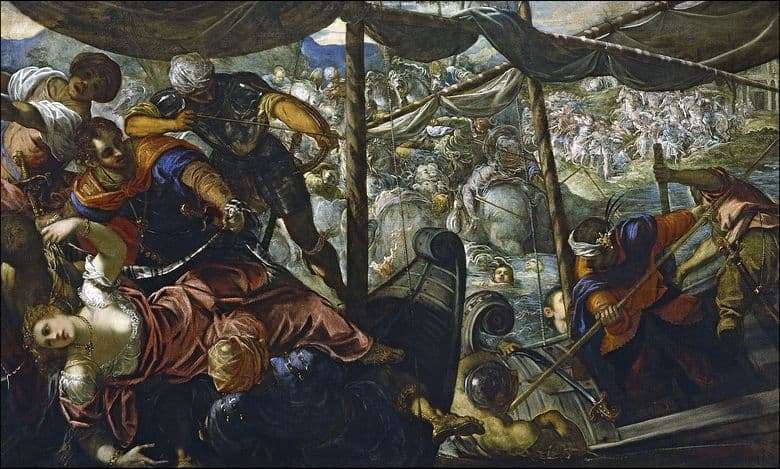 Jacopo Tintoretto’s painting The Abduction of Helena illustrates the ancient Greek myth about the abduction of beautiful Helen. Tintoretto worked in the late Renaissance, so the myths of ancient times were incredibly in demand and enjoyed great popularity. However, the master decided to transfer those significant events occurring many centuries ago, in his real world. Therefore, in this picture we see the abduction of Helen, not in ancient times, but in the 16th century.

The main heroine of the picture, of course, Elena. She was considered the most beautiful woman not only in Greece, but in the whole world. Some called her a goddess, citing a myth that says she is the daughter of Zeus himself. The girl is depicted in the lower left corner of the work. Her body does not seem to obey her, so the warriors barbarously took her in their arms and dragged her aboard the boat by force.

Pain, loss and helplessness can be

read in the eyes of the girl. She is being taken away from her beloved husband, Menelaus, and Hermione’s daughter. It seems that Helen was stolen straight from the royal chambers – she had rich, golden jewelry on her, her hair was neatly braided. But you can not so cruelly treat the wife of the king of Sparta: the red cloak wrinkled heavily, and the snow-white dress fell from the shoulders, exposing the chest.

The culprit of this inhuman abduction is Paris, who was captivated by the beauty of Helena. His artist depicted in bright blue-orange clothes. The man has a white ribbon in his hands. It seems that it is she who will be connected woman.

The alternative name for the canvas is “The Battle of Christians with the Turks”. If you start from this name, it becomes clear why many men depicted in the picture are dressed in Arabic clothes: long dresses, a turban on the head.

The foreground of the picture is spelled out in great detail, bright colors prevail. The background is more like a light, fuzzy pattern – all objects merge, showing the insignificance of what is happening outside the boat.