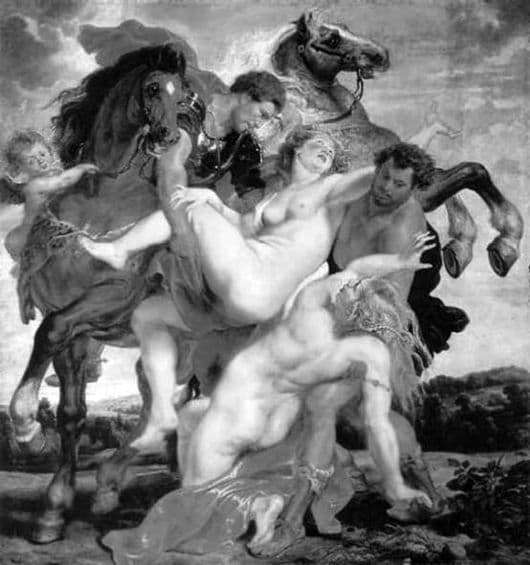 The plot of the painting “The Abduction of the Daughters of Leucippus” was taken by the great Flemish painter from the myth of the Dioscuri brothers who kidnapped two daughters from their father, King Leucippus. According to the myth, the kidnappers are beauties of cousins ​​who want to marry their beautiful sisters.

The picture created by the master of complex, multi-figured scenes is full of movement, rhythm and impetuous impulse. The movement begins with the horse tamer, Castor, and in a circle smoothly passes to the second girl, who is trying to push the fighter’s foot Polidevka (in the Latin version of Pollux). And then, the movement returns to the starting point.

It is still not known for certain why Rubens portrayed the beautiful girls Gilair and Phoebe naked in the field under the noonday heat. Phoebe is a priestess of Athena, and Gilair is the goddess Artemis. When abducting, the views of the girls are directed to the sky, either praying to the Gods for salvation, or thanks to them for sending the suitors.

Phoebe and Gilayir look feminine, weak and defenseless in comparison with the full masculinity and strength of Castor and Pollux. The skin of red-haired girls is soft and light, it causes strong contrast with the strong and dark bodies of men.

All these contradictions merge into a single harmony, depicting the physical and personal beauty of male and female characters. Heroes are as tense as possible, they slowed down, frozen in the picture of Rubens at the most climax.

On the neck of the horses hang little Amurchiki, which symbolize the love plan of the kidnappers who arrived. Creating a decorative composition, the great Flemish painter in this picture could ingeniously interweave lines and shapes. Looking at the canvas, the complex game of colors and lines leads away from real life and brings to the ancient antique story full of aesthetic sound, whose characters are full of sensuality, drama and thirst for life.