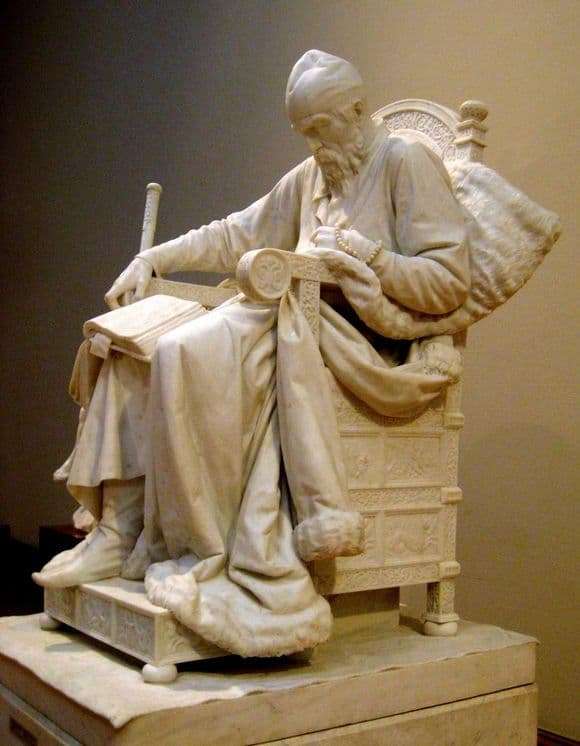 “Ivan the Terrible” – the first serious large sculpture of Antakolsky, the famous Russian sculptor. Interestingly, the youngest son in a large Jewish family, Antakolsky, was fond of drawing from an early age, painted everything he had reached, but his hobby was met by parents with strong disapproval and, as a compromise between their belief that the artists were lost and the boy’s desire to draw, Antakolsky was given to students as a sculptor.

Probably, this occupation seemed to parents more honorable and in the long term profitable. “Ivan the Terrible” is made with extraordinary art and attention to detail. He sits on a high throne, a soft royal fur coat falls from his shoulders, and at his feet, in fact, lies the whole country, obediently waiting for his every word. However, he does not feel the joy of such attention to himself. The power does not please him. You can see how tense it is in the whole pose. The back is straight, the head is slightly bent, the right hand compresses the arm of the throne, the left crumples clothes on the chest, at the heart. The forgotten book threatens to slip from its knees.

This is the fear of possible betrayal, and an excessively heavy burden of power, and rising old age, leading to leashes of many diseases. This is both the thirst for power and the fear of the future – the power is twisted out of hand, it is harder to keep it, and it is too early to transfer, the time has not come, the country, like a daring horse, will throw off the new rider. Here, and repentance, and heavy thoughts. In his lifetime, Grozny committed a lot of unsightly things, what it would be worth repenting, and that is why his (probably gray) head stubbornly leans so hard, not used to admit mistakes, not used to repenting, not used to asking someone for forgiveness. And although in the soul something is scraped, to this he responds evil, sternly, rejecting the very possibility of repentance. The book in his hands, with a bookmark – a simple hint. It was under Grozny that the history of printing began.