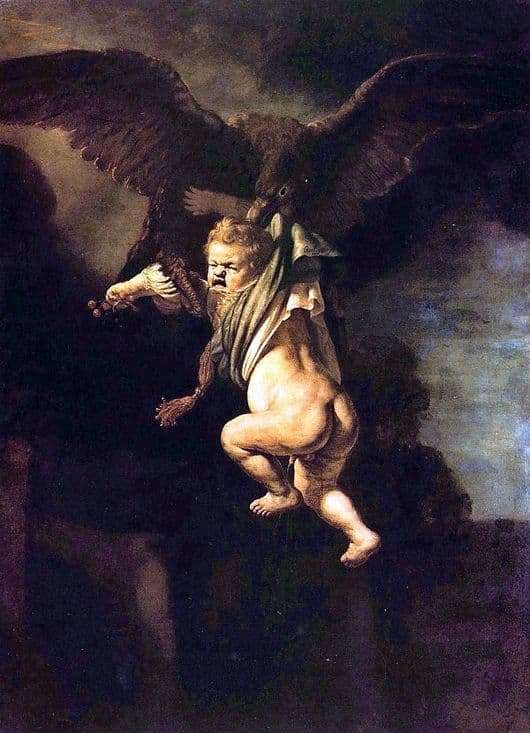 Rembrandt painted his masterpieces in the style of the play of light and shadow. The creator became the founder of the creation in the paintings of psychological orientation. The drawing is an extended concept that keeps on the canvas all the secrets of people’s life and feelings. The images for Rembrandt were muse in all undertakings, he liked not only to show the inner world, but also to impress the viewer with his technique. The basis of the Rembrandt palette includes paints such as ocher, burnt umber, cadmium yellow, mars brown. With these colors, even the faded soil became harmonious.

The work of the Dutch author “The Abduction of Ganymede” – the personification of the mythological history of ancient Greece. Diving into history, you remember how Zeus, the supreme god of Olympus, ordered that the little prince Ganymede be kidnapped to heaven. The reason is that the child has a vessel that they identified with the deities of the Nile River. Astronomically, Ganymede is placed near the star of Aquarius.

The picture is filled with many dark colors and shades. Fear and tears are visible on the face of the child, he is afraid that he will not return to the earth. The feeling of childhood suffering was clearly reflected in the work, and was very impressed by connoisseurs of painting. The eagle, cruel in dark brown, carries Ganymede to the sky, firmly holding his hand in its beak. At first glance, it seems that the bird can release the baby, but the artist focuses on the strength of the grip of an eagle.

The mythological theme in the works of Rembrandt does not give up on reality. The canvases of the artist show the presence of ancient life, which is represented by modern Dutch residents. The principle of the artist – the rejection of the ideal forms of the image, as it is contrary to the real world. The caricature of the figures is vividly expressed in Rembrandt’s masterpieces. Everyone appreciate the creativity of the Dutch painter can look into the mysterious and real world of his paintings.