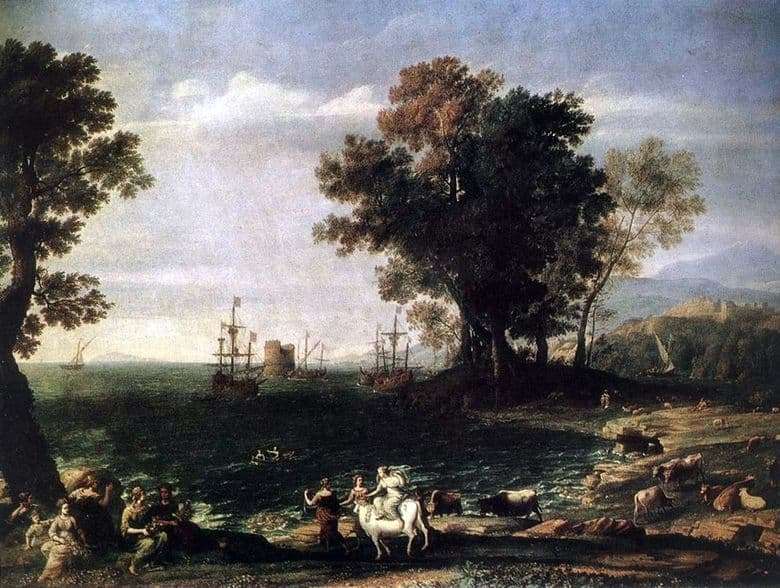 The plot is taken by the author from Greek mythology: once the great Zeus saw the beautiful Europe – the daughter of the king Phenicia. Having decided to kidnap a girl, the thunderer takes on the appearance of a white bull and joins the herd grazing on the bank. Seeing no danger, Europe sits on his back, and the bull drives the rider to the sea. There is no ending of the story in the picture, but the finale of their journey is not important to the author of the canvas – his attention is completely absorbed in the work on the pastoral part of the canvas.

The painter is not for nothing that he became famous as an outstanding master of landscape – in the picture the central role is played by nature, expressive landscape in the style of Renaissance artists. Virtually the entire space of the canvas is allotted to the sea, the sky, the hills.

Herd grazing on the beach, girls dressed in antiquities, weaving wreaths – movement only enlivens the foreground. Small figures resemble elegant porcelain figurines – they are so tiny against the background of the surrounding landscape.

Interestingly, Lorrain didn’t like to draw people – he trusted them to paint on his paintings to other artists, while he was completely devoted to working on the image of his beloved nature. In addition, in the classicism so beloved by the author, the landscape in its pure form was considered a “low” genre – the laws of style assumed the mandatory participation of living characters in the picture.

The artist has amazingly precisely created a color solution in the picture: the thick green background of the coastal strip gradually brightens, turning into a blue tint in the background of the picture, merging with the celestial expanse. The border between water and sky marks a small white sail far from the horizon.

Darkness moves away from the viewer along with the transition to the light, actually turning the flat canvas into a three-dimensional work.

In the “Abduction of Europe” the painter’s dream of an ideal world is depicted, in which the main thing is harmonious unity of nature and man, peace, harmony.