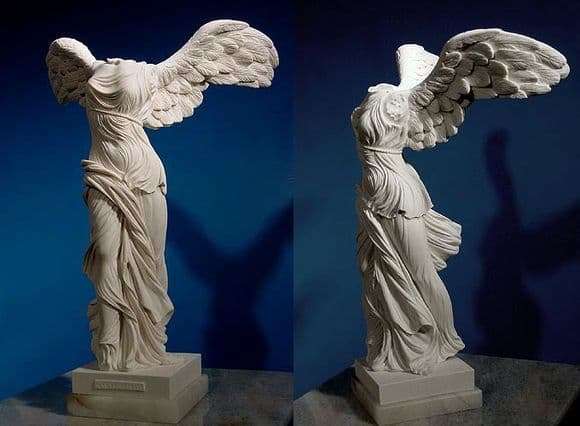 The statue of the winged goddess Nike is considered the most famous masterpiece of Greek art. She was discovered in the spring of 1863 on the island of Samothrace. Transported to the capital of France, and twenty years later installed on the stairs leading to the Louvre. Until now, people from different countries can admire the creation of an unknown sculptor. Although the marble statue does not have a head and hands, its historical value is undeniable.

There is a version that the masterpiece was created in 220-190 BC by order of Demetrius I Poliorket of the commander from Macedonia, when the victory in Cyprus was won. At the very base there is an inscription, which is almost erased, but you can read it. It says the word “Rhodes”, glorifying the sea victory.

Nika is on the rostral pedestal, which is made of Parian gray marble. Looking at the figure of the Greek goddess, imagine how she descends from the heights of heaven to the sailors.

She had a wreath or a horn in her raised right hand; it cannot be accurately determined. The wings behind Nika are symmetrically arranged, although only a small part of the left is left. Some parts of the statue were sometimes found, for example, a hand was discovered in 1950 at Samothrace, but the head and the rest of the hands have not been found until now.

The Greek goddess represents harmony and perfection. The movements of the figure are carved out of marble so naturally that the wind at the sea is immediately visible, and the clothing develops from this. Some time later, Nika of Samothrace was made a cultural icon.

Many museums around the world have copies of this statue. There is a well-known, which stands in front of a casino in Las Vegas. On the hood of the Rolls-Royce car is a figure resembling Nick. The first football cup in 1930 had the same form. She is loved by many artists and art historians. For example, Frank Wright often installed an image of a Greek goddess on ready-made structures.