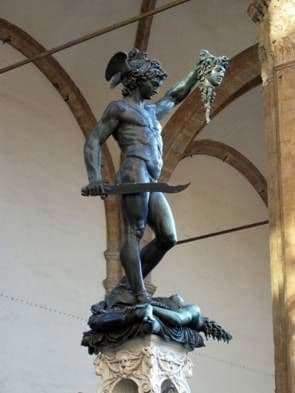 Perseus is known to be the son of Zeus. He was an invincible warrior. It is to him that the glory of the hero belongs, who was able to cut off the head of the famous Gorgon Medusa. In the 16th century, Cellini was asked to create a sculpture of Perseus in bronze. It was necessary to capture the hero at the very moment when he threw the gorgon and stands above her prostrate body, holding a severed head in his hands. It was necessary to make the statue hollow inside. Such work required a lot of energy and, of course, time. Originally, the statue was made of clay, then it was burned and waxed on the entire surface, and then another layer of clay was applied.

After this, the wax was melted in a special way through the holes left for this purpose. Then bronze was poured into the formed void. The sculptor conceived a very complex figure of Perseus. She was full of details therefore, almost no one believed in the success of the plan. The casting was under very difficult conditions. As a result, true magnificence was created. Many believed that this is a true miracle. It was a real downpour, so the sculptor ordered the furnace to create the highest possible temperature. This led to the fact that the furnace collapsed, and a fire started in the workshop. The work was already in full swing, but suddenly it turned out that bronze was not at all of the quality required. Cellini gave the order to collect all the utensils from the tin and throw it into the furnace. At that time, it was valued almost as high as silver.

The sculptor himself was very sick and worked with all his might. The statue is really impressive. Often, viewers do not see the body of the gorgon, which lies at the feet of Perseus. Cellini decided to sculpt Medusa as a beautiful young woman. The smallest details amaze which managed to transfer to the sculptor in metal. Before us is a true masterpiece of a true master.