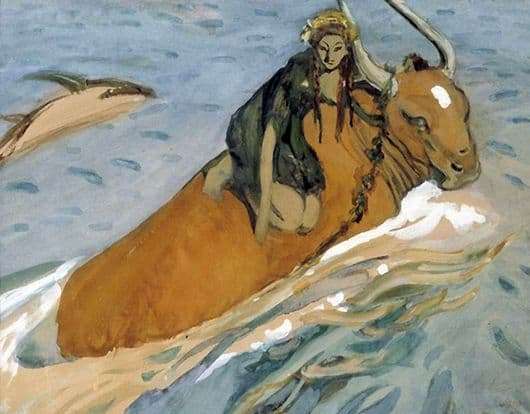 “Abduction of Europe” is a masterpiece created in 1910 by Serov Valentin Aleksandrovich, a famous Russian painter. The master was inspired by a trip to Greece in 1907. In particular, Serov was struck by the ruins of the Palace of Knossos.

The artist turns to a plot popular in ancient mythology about the abduction of beautiful Europe by Zeus. The girl was the daughter of the Phoenician ruler Agenor. The mighty Zeus falls in love with her and decides to kidnap. To do this, he turns into a bull and in this appearance appears in front of Europe and its friends. As soon as the girl, deceived by the peace-loving behavior of the animal, climbs onto his back, the bull rushes into the sea and takes the beloved to the island of Crete. Europe becomes the wife of the Greek god, they have three sons born.

This ancient legend has repeatedly inspired artists long before Serov. But his canvas is very different from the works of predecessors. There is nothing from light tones, lightness and elegance of lines and marble transparency of academic canons. The painting of Serov produces, rather, the impression of scale and monumentality.

The composition of the painting “The Abduction of Europe” is interesting. It is all built on a diagonal motion. This creates the effect of intense movement and aspiration upwards. The silhouettes of all the characters – the girl, Zeus, the dolphin – are deliberately extended diagonally. The horizon line is very high. Most of the space of the canvas is reserved for the image of the sea, formidable, raging and restless.

In the center of the composition are the bull with Europe, which clings to it in a fright. The movements of Zeus, powerfully dissecting the waves of the sea, repeat the dolphin, which only enhances the dynamics of the picture and gives it a special rhythmic pattern.

Unusual and color solution works. Serov uses saturated, bright colors. It departs from the ancient canons and makes the bull not snow white, but orange-terracotta. Perhaps the artist was inspired by the frescoes he had seen on the island of Crete. Especially brightly this spot stands out against the background of blue-violet waves, merging with the lead-gray sky.