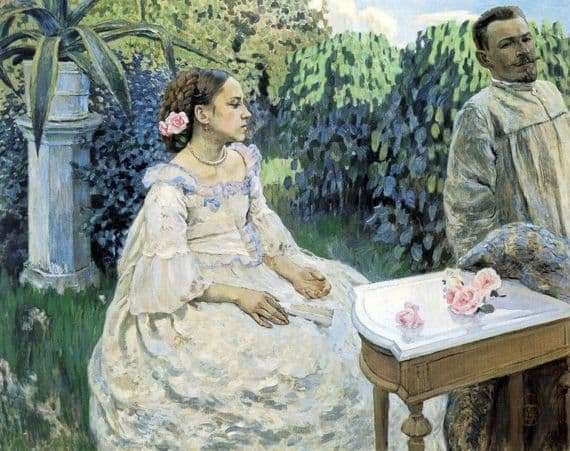 The canvas was created in 1898 in oil on canvas. Borisov-Musatov is a Russian artist of the late 19th century, beginning of 20. He was born in the Saratov province, where he painted many canvases. Having lived only 30 years, he left us beautiful paintings that came to the cultural heritage of our country. The artist painted his self-portrait with his sister in 1898, since that year he has already lived in Saratov.

The portrait he created in the estate Zubrilovka. It was his favorite place, the beauty and picturesque of those places, always had a special place in his soul. In the self-portrait, the artist portrayed himself and his sister Elena. She was very young, she was only 14 years old. But the image created by the author on the canvas, shows us not a young, whimsical girl, but a lady who deeply talks about the past era. She is dressed in a dress worn in the forties of the 19th century. The artist portrayed his portrait only half.

Faces depicted detachment. All the works of Borisov-Musotov are filled with mystery, imbued with the spirit and sadness of the passing era.

Portrait of a sister reflects the drama in their souls. Silence, glance all shows us how keenly the heroes felt the coming changes. The era of symbolism, gallantry of gentlemen and serenity of ladies is leaving. There comes a new century, which will never be similar to what it was before. Brother and sister seem to scroll through all the events associated with the past era, wanting to stop the temporary run. The artist created this picture a few years before his death. After a century, we can see the beauty, elegance of that time. The picture was painted on a sunny, summer day on the terrace of the beloved manor. For her motives Tyutchev wrote several beautiful lines. A couple of years later Borisov-Musatov will create another masterpiece of painting “Ghosts”, under the impression of the neglect and withering of his favorite place, like a premonition of a quick end. The painting is in storage at the State Tretyakov Gallery. Moscow.