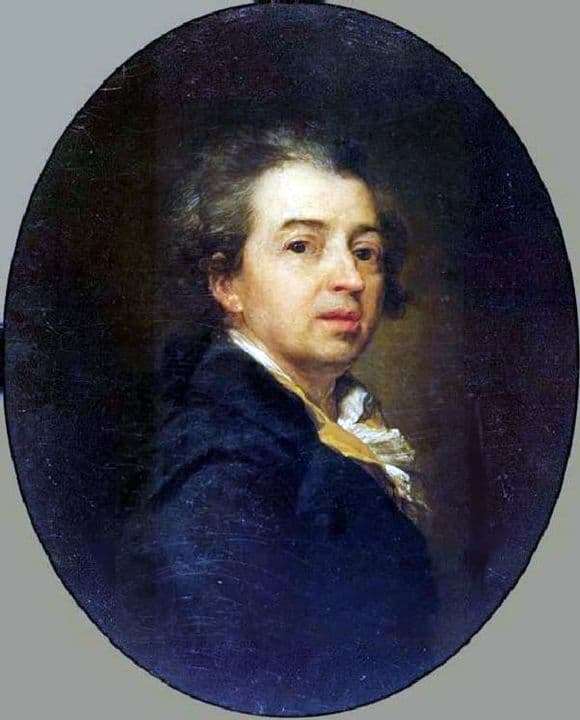 Work written in 1783. Its unusual and mysterious story to this day remains not fully disclosed. Relatively recently, this work was called the “Portrait of the Unknown” and was purchased from a private person in the 50s of the last century, together with the similarly sized “Portrait of the Unknown”. Both works were exhibited together in the art gallery of the city of Chelyabinsk. After a series of examinations, the authorship of the “Portrait of an Unknown” was established, who Dmitry G. Levitsky was, but his involvement in the creation of a portrait of a woman was not confirmed.

The canvas depicts Dmitry Grigorievich himself, where he is supposedly 50 years old. It is interesting that the artist was able to highlight all the details of his image, giving the picture realistic and lively energy. Looking at the portrait, the viewer can note the elation of the character’s mood, self-confidence

and at the same time the simplicity and good nature that emanate from Levitsky. The artist also highlighted such details as facial wrinkles, gray hair, which speaks of his objectivity in writing. Such a habit can be traced throughout the work of Dmitry Grigorievich.

The portrait is not burdened with paints. Levitsky is depicted in the light on a dark background. Such an approach to portraits is considered a classic in painting, since the selection of the character’s outline, its characteristics and distinctive features becomes fundamental. Often the background did not matter much, they tried to avoid it altogether. Such a policy involuntarily paid the viewer’s attention to the hero of the picture.

In the picture Levitsky is depicted sideways, his head turned slightly toward the viewer. His gaze is slightly raised, but only to give the portrait a “living” form. Speaking about the size of the portrait, it should be noted that they are only 20 cm in height. Thus, the artist gave the work some intimacy.