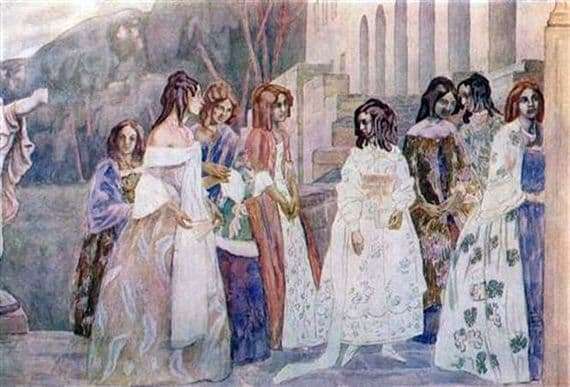 Another painting by Borisov-Musatov, Requiem, continues the ideas begun in the Emerald Necklace. The huge easel watercolor worked out to the finest details was devoted to the tragic death of the artist’s close friend N. Yu. Stanyukovich. The artist is incredibly grieving for the person who is beautiful and close to him. The grief caused by such an unexpected death was expressed in the image of “Requiem”. The whole picture meets the classic style and form. Carefully traced details, but did not help the artist to revive the characters in the picture. All women are depicted flat, as if they were shadows of terrible grief and despair.

The building and the park depicted at the back, just like in the “Necklace”, serves more as a background than a voluminous space. Despite the themes of sadness and grief, as well as pessimism, the author prefers light colors and shades. They smoothly move from the walls of the building, to the costumes and outfits of women, light tiles, and the look of an antique statue. In his creation, the artist Borisov-Musatov was able to replace the living heroes with symbols, and thus unusually close to symbolism, in the form of mysticism. A picture of his author wrote in the town of Tarus, located on the banks of the Oka River. There the artist spends from March to November 1905.

He was not interested in the public and all the events that took place there, if they came into contact with his creative interests. However, being in the silence of an ordinary village, where rumors about protest, peasant strikes and unrest hardly reached, he looked forward to new newspapers, as well as the arrival of the “Russian Republic”. All these events echo the work of the artist. It is this year that he begins to work on landscapes,