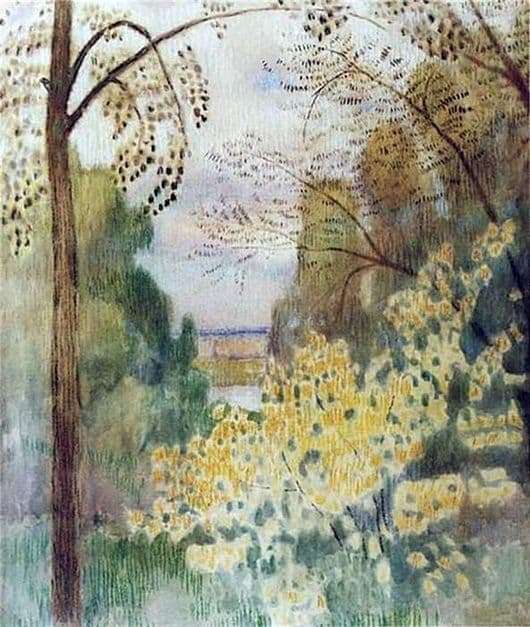 The picture is painted in oil on canvas in 1905 in the last year of the artist’s life.

Cloth refers to post-impressionism. Borisov-Musatov is known for its landscapes, which are covered with a haze of unreality.

Hazel bush is a painting that was painted on the terrace of Tarusa, where the artist lived and was buried. He loved the landscapes of those places, especially inspired by the powerful waters of the Oka. The place where the hazel bush was painted from is the country house where Borisov-Musatov painted several of his panoramas depicting the Oka. They formed a cycle on the autumn theme.

According to the colors of the canvas, it can be concluded that autumn has only just begun to take over, since there are both yellow and green leaves among the vegetation. But the weather was very cool, the artist captured it in gray heavy clouds.

Hazel leaves tremble chilly with autumn coolness. All colors are intertwined, creating a common deep storyline. The cold waters of the Oka flow slowly in the background. Somewhere far away on the horizon is a blue sky band.

In the center across the river, the artist painted yellow fields, resting after the harvest. But the most important attention is attracted by the hazel bush, which has spread its yellowed thick branches in the foreground. It is no longer green. He seems to be pulling his branches to slender aspens.

He lived not a long life of only 35 years, but during this period he created 77 paintings that will forever remain in the heritage of our country. He is buried near the place where the picture of their autumn cycle was written.