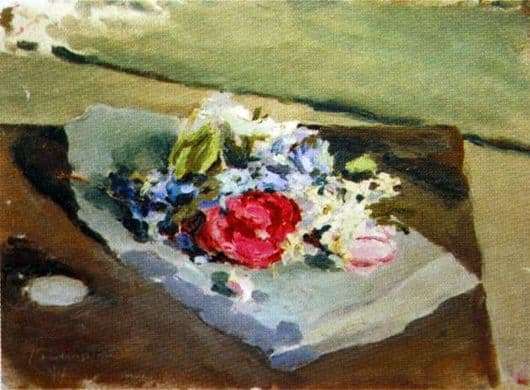 That seems to be a completely inconspicuous canvas, and nothing expressing anything. Just a part of the table, a corner and flowers are laid out on some white tile. And not just flowers, but inflorescences, that is, the very top, the stems are removed. It is almost impossible to determine exactly which flowers.

Visible rose, the brightest spot. Then we can assume that there are cornflowers or sprigs of lilac. But this is only an assumption.

Amazingly built composition. The background is given to us the floor, and it is as visually close to us as possible, then the angle of something brown is either a table, or a cardboard that lies on the floor. And only on this brown flowers recline.

And now it’s worth telling a little about the author. The thing is that he entered the Russian school of painting as a brilliant artist, having only a few dozen canvases in his baggage. Bright paintings, genre and landscape, there are also portraits. But all this was done under very sad circumstances – the artist from three years was not healthy and ugly. He was a hunchback.

But this did not prevent to go to study at art schools and academies. And even studied in one of the art studios in Paris. He painted great, so many thought. His paintings are now almost all in the Tretyakov Gallery. But the artist himself was never a metropolitan, he mostly lived in Saratov, and spent the end of his life in Podolsk or Tarusa.

Tarusa and became his last refuge. The artist was only thirty-five years old when he was gone. It is negligible and, unfortunately, he did not have time to fully demonstrate his talent. Or maybe it’s good that such a talented person left early. He certainly could not survive all those events that just began in 1905. It is known that such people are vulnerable. He could not survive the revolution.