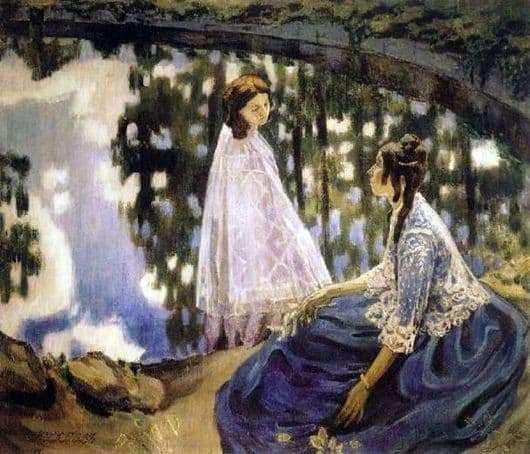 Writing a picture, the author began in the park of the estate of Princess Prozorova-Golitsyna in the estate Zubrilovka. Borisov-Musatov depicted his sister and Elena Vladimirovna Alexandrova. The picture was painted shortly after Elena agreed to become the artist’s bride. In the figure, all the details demonstrate the femininity sung by its author.

To many viewers, especially those who saw the picture in the original, it seemed not very real, they saw something fabulous and detached from time. Apparently, although the canvas was written entirely from nature, this special atmosphere is explained by the spiritual state of the artist during his work. The image conveys his vision of the world: poetic and sublime.

In the composition there is no horizon line, which allows you to merge the foreground and background together. The figures in the picture complement each other: a pond that extends beyond the canvas has an oval shape, just like a neatly laid skirt of one of the heroines. Unlike everything around, calm and refined, it is all in sinuous folds that add dynamics to the picture, such as, for example, a small ripple makes the quiet seascape more alive. In general, the absence of a natural landscape as such is compensated by the trees, small bushes and greenish grass reflected in the water surface.

The heroines are near the pond, in the foreground of the picture. And despite the fact that the reservoir is depicted very close, it may seem like a serene sky, which literally hangs over the young ladies. And now this is a completely different landscape in which the ladies stand on a small hill, beyond which there may be anything. But most likely – the forest, some of the trees from which rushed into the sky. Thus, the Symbolist artist was able to create a landscape that appears in completely different ways, depending on the imagination of the viewer.