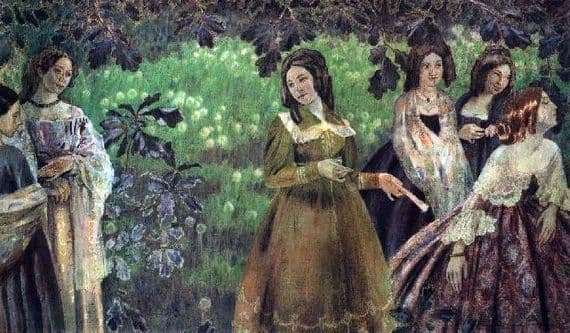 In his “Emerald Necklace,” the artist tried to convey images of the combination of colors and the beauty of decorative elements. Young women have settled down in a green garden. Borisov-Musatov himself considered his work a reflection of paganism. Her beautiful heroines personify the spring, blooming nature. They are like flower buds unfolding and stretching towards the sun.

The inspiration for writing a picture served as a May green nature, the flowering time of most flowers. The artist himself called this time “late spring.” She filled his mind with her bright color combinations. Thanks to the sensationalist beginning, this picture stands out from all other works of the artist. In it, nature and people merged into one. In this composition, there is absolutely no horizon line.

Green lawns and dandelion buds, in the frame of oak leaves, very much like the image of the ornament. All this is a background, parallel to the heroes and the canvas, and not the space behind women. The women depicted, although they seem very static at first, still, when they look again, they start to mix left to right. This is the first work of the artist, on which so many figures appear, depicted in motion.

From one to the other edge of the picture, as if passes a wave-like rhythm, subordinating patterns on the foliage, the location of the dandelion buds and naturally the six heroines of the work. In the middle of the picture there seems to be a small pause, sharing the composition of women among themselves. However, the distance between them is smoothed by the gestures of an invitation to proceed forward, expressed in the central figure, dressed in a yellow dress. A strip of dandelions and leaves also unites female figures.