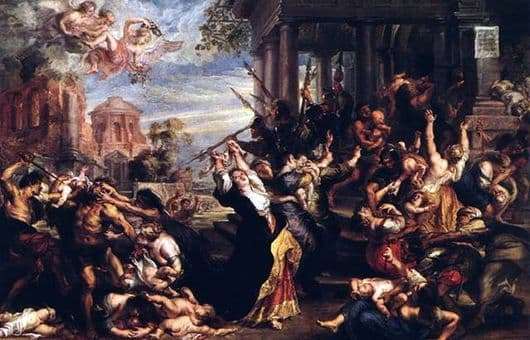 The period from 1600 to 1608 in the work of Rubens is closely associated with Italy and Spain. It was here that he plunged into classical art, and especially in the Renaissance. Returning to Antwerp, under the influence of the brilliant works of Italian authors, the artist creates a number of canvases of mythological and religious themes.

Today, the National Gallery of London exhibits one of the most famous and expensive paintings in the world, “The Beating of the Innocent”, which depicts a story from a biblical legend – the soldiers of King Herod exterminate babies.

As you know, this masterpiece was voluntarily transferred to the gallery (temporarily) by its owner David Thomson, who bought it at one of the auctions for 49.5 million pounds. According to the administration, of the museum, many viewers will be able to see this canvas by Rubens for at least three years.

The painting depicts a garden near the palace of King Herod. There are many warriors who draw their swords, babies are forcibly pulled out of their mothers. They are crying with grief, wringing their hands in despair, and trying to resist violence. And the earth around is already covered with dead children’s bodies. Innocently killed for the whim of the sovereign.

The artist managed to convey all horror and fear of what was happening on a rather large canvas, especially brightly. The faces of mothers are disfigured by horrible grimaces, while warriors have a seal of cruelty even on movements. Rubens does not simply transmit the plot, he as if urges the viewer to reflect on such incredible cruelty, to recall its causes and further consequences.

The very background of this canvas is rather gloomy, made in dark shades, only warriors, mothers and children are brightly lit, above which terrified gentle angels are frozen – a symbol of infant innocence and purity. They are in bewilderment and fear; they do not understand such cruelty towards children.