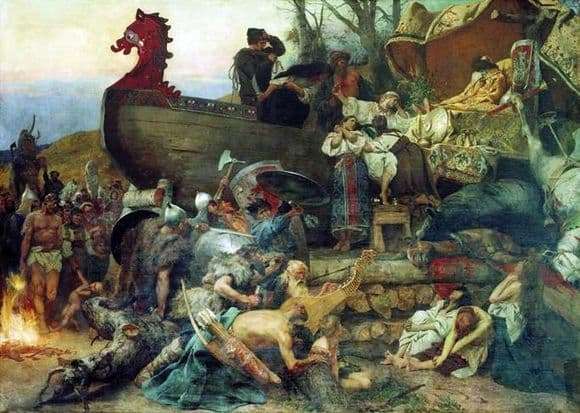 Semiradsky depicts in the picture the climax of the traditional Russian burial rite. At the very most you can see a man standing. He has already set fire to the torch and is about to transfer this fire directly under the boat. First, the deceased was placed in a temporary grave, and now they are taken out to perform the main act.

We see that he was put on the best clothes, impressive for their wealth. Then they put him in a boat, laid down all his weapons and laid out the food. Various animals were sacrificed. One of the girls was chosen to be the wife of this deceased. She will be burned along with this rich Rus. The painter created a picture on the basis of the original source. The themes of many of his creations were stories taken from the Bible. He is a brad of ancient texts and interpreted them in his own way. This gave him the opportunity to express himself. There was no exception, and the picture of the funeral of a rich Rus.

The source was the most detailed story about this rite of the Arab Ambassador. He saw how the body of a dead man was burned and buried on the great Volga River. The traveler describes in detail the rite, which lasted ten days. The artist interprets the plot in his own way. In his picture a lot of details. That is why it would be desirable to consider it, finding all the new and new details of this rite.

Expressive strokes and bright colors impress. It creates a complete sense of the reality of what is happening. All the characters of this canvas are the most voluminous and tangible. The viewer feels like an unwitting witness to what is happening. The rite is depicted with naturalistic precision. Such a creation of the painter is truly impressive with a special view of events and an unusual interpretation of the plot. The picture is replete with expression. We feel,