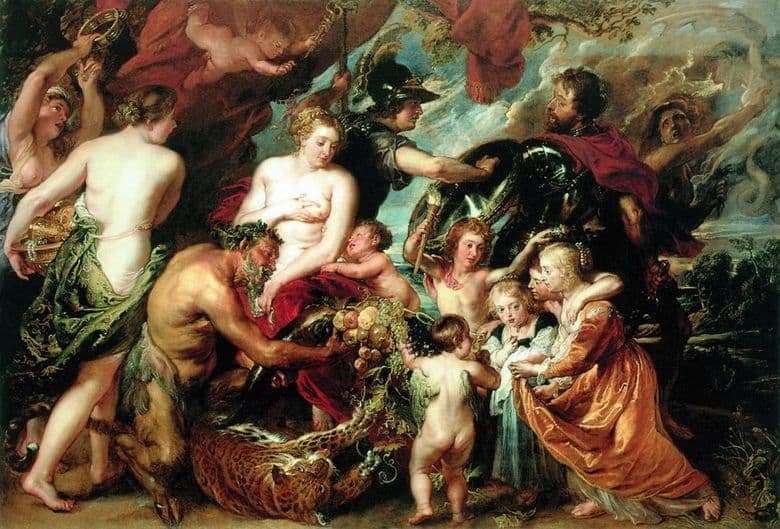 This picture is an example of how art is sometimes capable of solving world-wide problems. The work of Peter Paul Rubens “Allegory of War and Peace” was commissioned from the artist by the Spanish king for a gift to the English king. The peace treaty between Spain and England was signed largely due to the artist’s talented portrayal of the wrong war.

In the picture we see the Roman pantheon of gods. In the middle is a naked girl – she personifies a peaceful life. To her right we see a small child, whom she feeds with milk. This baby is the god of wealth. War has always ruined the treasury of the state, so peace in the picture is accompanied by wealth. In front of the girl is a satyr, in his hands is a cornucopia, from which various fruits fall out. The cornucopia, of course, is also a symbol of prosperity, wealth, money and fertility of the earth. On the left side of the canvas are two young girls. One of them plays the tambourine, symbolizing dancing, joy and fun. The second girl carries a large, deep pelvis.

The vessel is made of pure gold and decorated with various precious stones. Inside the pelvis there are also cups, vases of gold, beads of natural pearls. This basin of pure gold symbolizes not only wealth, but also an offering. That is, a picture of Peter Paul Rubens is presented to the English king as well as this vessel full of gold jewelry.

In the foreground we see four small children and one angel. Children also personify a quiet life, family happiness. The background work is devoted to the war, or rather, to prevent it. The Roman goddess of wisdom, Minerva, chases away the war god of Mars. The girl is depicted in a warlike pose, in armor and with a weapon in her hands – she clearly intends to expel Mars.