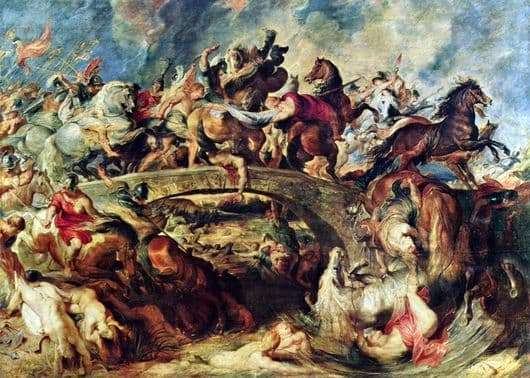 The painting was painted by Rubens in 1618.

Who are the Amazons? This is a tribe of women who are known to us from the mythology of antiquity. They constantly hunted and fought. Their main armament was a spear, an ax and a bow, as well as a shield. Most often, the Amazons were depicted on horseback.

If the artist wants to reproduce the movement, then the battle is the most advantageous for him. In the picture of Rubens, we see the battle of the Amazons, which is in full swing. How does the artist manage to convey the swiftness of the movements? He tries to influence the imagination of the audience as much as possible.

Before Rubens, women were often depicted as weak and completely defenseless creatures. If they appeared before us in the heat of battle, they did not cease to remain women, and the whole battle was going on as if for fun.

The most representative genre of painting – the battle. It was in battle that the artist could express himself fully. In battle, human emotions reached their limits. The figures of fighting people can be depicted in a variety of poses. Why is the battle so attractive? It is dynamic, filled with unstoppable energy.

Rubens canvas depicts Amazons in the heat of battle. What are these ancient female warriors so attracted painters? They were very unusual and beautiful at the same time. Many images of antiquity were devoted to the battle of the Amazons with the Greeks. But it was mainly shown how the Greeks were oppressing these warriors. The most obvious was that yet this struggle was equal.

Rubens portrayed this battle completely differently. On his canvas, we do not see the battle of equals. Rather, it resembles a real massacre. The traditional battle plot has a new impulse. The views of Rubens women, even if they are armed with swords, remain quite vulnerable. They are victims of war and completely defenseless.