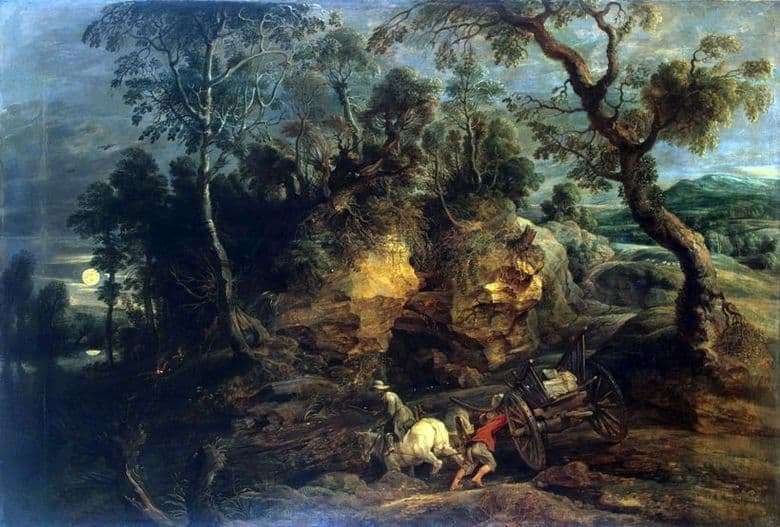 Landscape painting by Peter Paul Rubens – the culmination of the development of the 17th century Flemish art. During this period, the foundations were laid of the social consciousness inherent in the emerging New Age, when in the visual arts of Western Europe an active rethinking of earlier views on the relationship between nature and man took place. In landscape painting of that time, nature was considered in a generalized form, where living and nonliving are closely intertwined.

In the picture “Stone rolling”, as in other landscapes of Rubens, the world around us appears as a single, powerful and formidable force. In the center one can see heavy clutter of rocks and boulders, densely covered with powerful roots of tall trees, uneven trunks of which are in constant, eternal movement.

The same continuous movement occurs in the sky, where the rays of the setting sun are already replaced by a rising full moon. In the foreground, the artist shows people – these are stone trucks, busy with their hard work. The arrangement of the elements of the picture, combining a horizontal and vertical perspective, gives the landscape a sense of volume and depth, as in a three-dimensional image.

Depicting the power and strength of nature, the painter introduces into the picture the motive of transforming human activity: a person here is not a passive creature, but an active co-founder of the surrounding world, a direct participant in the processes taking place in it. This worldview, which was developed at the end of the Middle Ages, became prevailing in Western European art of later centuries.