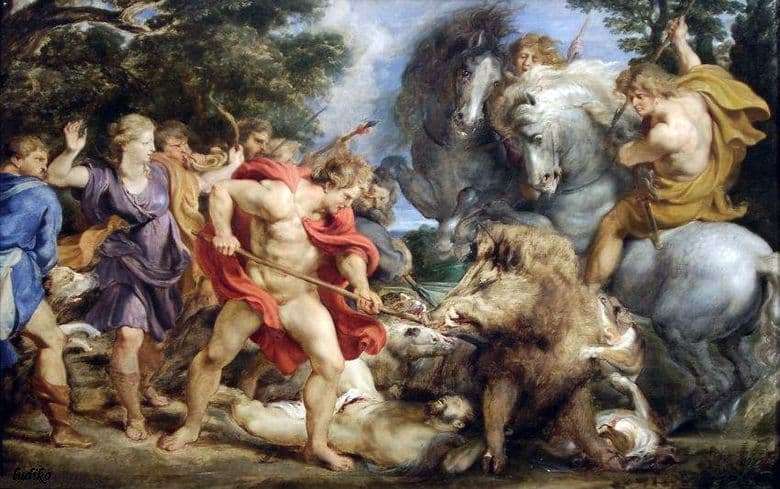 Speaking of Rubens and examining his work, most art critics fail to hold back admiring sighs. Each canvas is drawn by the author in sufficient detail, he pays attention even to those elements that seem to be completely eluded. But only thanks to the detailed general drawing, that enthusiastic impression is created when viewing the work. It does not disappear neither after the first observation and analysis, nor after the fifteenth. No wonder Rubens refers to the period of the best classical painting in the entire history of world art.

The picture presented above is included in the cycle of the first phase of hunting images. This stage lasted until 1620. Later, the work of Rubens acquire a slightly different character. So, the painting entitled “Boar Hunting” has two compositional centers, which give the canvas the most expressiveness. One of them is just in the middle of the canvas, but the other passes through the entire diagonal. If we consider the period of the climax of this picture, then it is precisely the victory of the people who hunt over animals.

This is not just an image of the hunt, first of all, it is a myth that tells us about the hunting of a boar in Caledon, when only the brave and cunning Meleager can defeat him. He will pierce the boar with his sharp spear. More information about this story can be found in the works of the scientist Philostrat the Younger.

On this canvas, we see all participants in the myth. Here and the boar, who stands surrounded by hunters and hounds, ready to tear to pieces at any moment; and Atalanta, who had tried her luck and had just shot her arrow to hit the target; and Meleager, who plunges his spear into the evil beast; and killed, which lies next to such a famous boar. Many artists of Flemish tried their luck by painting their own canvases for this motive, but nobody managed to do it better than Rubens.