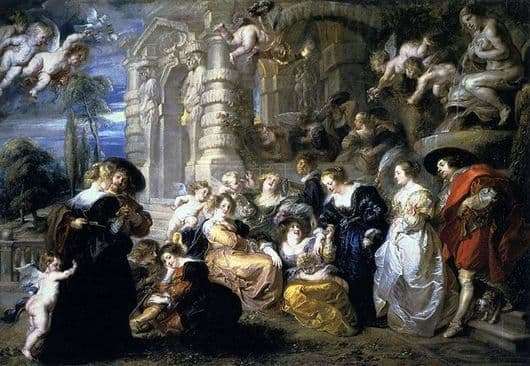 Cloth by Rubens “Garden of Love”, or as it is also called the “Garden of Lovers”, is often interpreted as a description of a certain period of the artist’s life, or rather, the time after his second marriage. Perhaps this is so. Especially if you consider that the picture was painted by Rubens for the soul, and not “to order”.

The overall composition is a group of resting people on the background of the temple of the patroness of marriage, the goddess Juno.

On the left is a pair: a young girl in a blue dress and a gentleman, in whose face there is a clear resemblance to the artist himself. The pose of the couple clearly hints the viewer to the romantic period of courtship in their relationship. The girl in the picture is a little embarrassed, the man is persistent and convincing. They are clearly attracted to each other.

In the central part of the canvas, the viewer sees the same girl next to three other women. Her face has changed. She is no longer confused, but is involved in a conversation with one of the ladies. To the right, another group is approaching this group: a woman in white clothes and a man dressed in Spanish style. This is clearly a married couple, possibly just married.

Such an arrangement of composite elements is far from accidental. Rubens shares with the audience the story of his newfound love: from the first love to the desired moment of the wedding ceremony.

The canvas is imbued with allegories of a love theme: the temple of the patroness of marriage, women in the center, who personify prudence, ecstasy and happiness of motherhood. And, finally, a lot of angels and cupids, characteristic of the paintings of the time.

Did Rubens in the picture depicted the story of his love? Partly yes. But only the genius himself could say that he owned his feelings at the time of writing the canvas. Perhaps he was simply inspired by the love poems that were popular at the time, for it was not without reason that Rubens himself called his work… “Fashionable Conversations”.