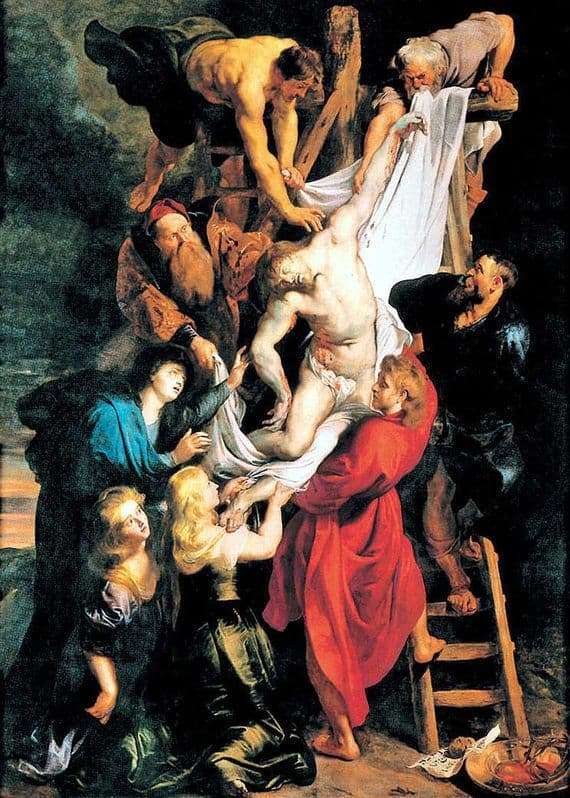 Peter Rubens painted his famous canvas from 1610 to 1613. At that time there was a fashion for drawing pictures on religious themes, and Rubens was no exception. Connoisseurs noticed that the style and some elements of the canvas testify to the influence of its teachers – Tintoretto and Caravaggio.

In the center of the picture is the helpless body of Jesus, which is about to fall into the hands of the apostle John. The artist deliberately painted the skin of the Son of God in lead color, in order to compare the body that had hung for several weeks on a cross with a marble statue. The image of Jesus is surrounded by the life-affirming clothes of his disciples and all those who are compassionate.

Several elders gathered around their spiritual mentor who, with their last strength, are trying to help remove the body from the cross. Rubens was able to emphasize all the weakness of an old man who was desperately trying to hold onto the heavy body of Jesus.

Against the background of turmoil, the Mother of God stands out – she stands motionless, like a statue, with a marble-colored face. The artist skillfully depicted all the inner experiences of Mary. If you look at her face, you can read the thought: “I recently washed my beloved son’s feet, and now I have to watch him take off the dead from the cross.”

Despite the “gravity” of the event, there is no obvious “drama” in the picture and an attempt to play on feelings. There are no screams, tears and theatrical gestures, people just take the body of the Son of God from the cross. Despite the strong influence of his teachers, Rubens abandoned the common grayish colors and painted his picture in light gray and amber colors. As a result, the picture was very realistic and lively.

Thus, this picture can be safely considered the best work of Rubens on a religious theme, she brought him fame as a “defender of Christian values.”