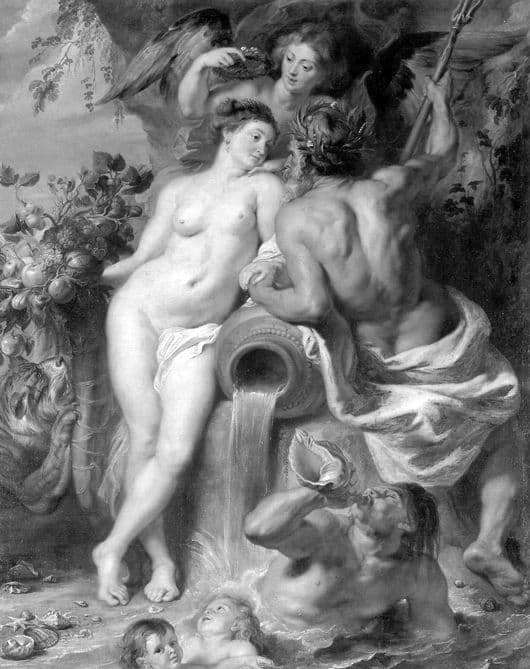 We have before us a beautiful canvas by Rubens, on which, as we see, the “Union of Earth and Water” is captured. But it should be more specific to deal with this issue and put everything in its place, since Rubens was far from being an abstract artist, but more a symbolist, and everyone, even if at first glance a sloppy stroke, could mean quite a lot.

In front of us on the canvas, a pretty bright girl, stands naked, leaning on a jug of water from which water flows. On her face, a kind of indifference, or even, most likely indifference, froze. Most likely this was caused, far from being a young, but very impressive middle-aged man, who has his back to us, but with the profile of his face, we can understand that he is expecting some kind of response from this girl.

The goddess Victoria, who is above this girl, emphasizes the girl’s carelessness and serenity holding a wreath. Slightly lower in the picture is seen a triton, which, to put it mildly, does not quite fit into the overall concept of the picture, but still quite common in the Baroque era. He blows into the sink, and his whole image is rather disgusting and unpleasant. In the lower left corner of the picture we see two small children who splash in this water and are also characteristic when painting pictures in the Renaissance era. In addition to all this, there is such a hypothesis that these two children, in fact, exist, none other than the children of Rubens.

At that time, when this picture was painted, the girl was about 7 years old, and the boy was about 4 years old. Everything seems to be interesting and transparent, but one thing remains that the artist symbolizes in the form of a tiger. But it is not known why this animal, and not any other. But again, Rubens, this is one of those artists which does nothing for nothing. Everything in the picture has its meaning, just some is inaccessible for understanding.