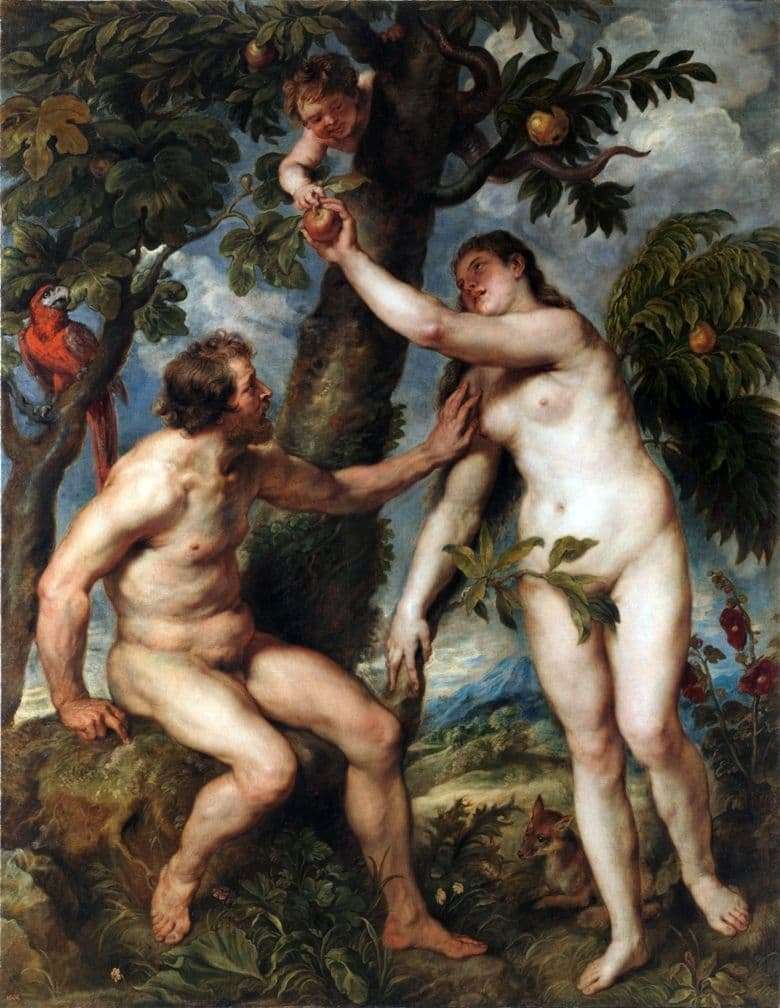 A painting by Peter Paul Rubens “Adam and Eve” is written in a biblical story. This work is almost a complete copy of the work of Titian.

Artists of those times, as well as modern ones, had many reasons for copying paintings. But Peter Paul Rubens certainly did not do it for the money. He considered himself a student of Titian and tried his best to imitate the style of the master. Therefore, this work can be said to be a teaching material for Rubens.

But the master of the emerging Baroque did not want to completely copy the picture, some innovations, independent ideas of the master are visible. For example, we see in Rubens: on the left, a big red-footed parrot is sitting on a tree. Apparently, this detail should carry the viewer more into the Garden of Eden, where exotic birds soar freely. The male figure is completely naked. In the picture of Rubens we see that neither clothes nor the traditional fig leaf covers the man. The artist also depicted Eve as naked, but her hips are masked by a small branch of a peach tree. Woman’s chest is completely bare. The nude image of a male and female figure suggests that in Eden there was no need to hide, be shy – people did not know shame.

Behind Eve and Adam are three trees. Directly behind Eve – peach; for Adam – fig. Between them is the trunk of a large, mighty tree. The leaves are almost invisible, but juicy red apples hang on the branches. Very soon the innocent, immaculate life of Adam and Eve in the Garden of Eden will be over. An angel peeks out from behind a tree trunk. He has plump hands and cheeks, curly hair. However, instead of his legs, he has two snake bodies. The serpent in the guise of an angel gives Eve a big apple. The girl extended her hand to the angel and took the deceptive fruit. Adam tries to stop Eve from making a mistake.