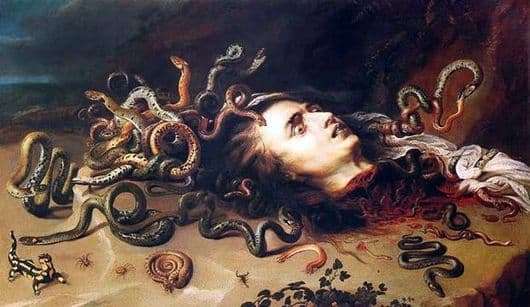 Rubens painted the picture “Head of Medusa” in oil on wood. As for Rubens himself, it is customary to call him a Flemish painter, although in reality he is the greatest representative of all European painting, and in fact, looking at this work, it is very difficult to argue with that.

In this picture, the originality bordering on the genius of the master’s brush is quite vividly seen; the artist was able to absorb all the best from his predecessors and embody it in this work. Needless to say that in the picture there is a combination of several styles, which at one time used some of the masters of the Renaissance.

Directly in the picture one can observe the vital coloring, despite the tragedy of the situation, and a certain aversion from the severed head. At the same time, the picture is not without its brilliance and saturation, which is actually quite difficult to convey along with creeping reptiles and arthropods.

The picture is so lively that, if you look closely at it, it may seem that it comes to life, and the master with his brush is like a conductor of a symphony orchestra who plays the last seconds of the life of a head cut off from the body before the audience. At this time, it is impossible not to note the whole flavor, and the power of the traced figures in all this dramatic production.

Despite the reality and clarity of the whole motive, there is a lot to think about. Special attention should be paid to the plasticity of the painted forms, it also surprises how much the master perfectly cognized the art of light and shade and successfully applies it in this picture. Thus, despite the plot, the master seeks not merely academic writing of a picture, but an independent in-depth study of nature itself, be it a beautiful angel or a cut-off Gargona head.