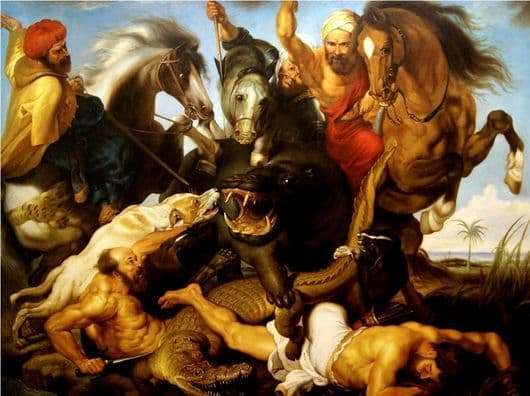 The hippopotamus is depicted much less than in reality. But if you look at the whole, then the appearance of the animal is transmitted correctly. From the mouth of a hippo stick fangs.

Rubens created a whole series of paintings on the subject of hunting. The viewer pays tribute to the skill of the painter, but at the same time feels some improbability of what is happening. Before us is a hunt for two animals at the same time – a crocodile and a hippo. On the one hand, these animals both live in water, but it is rather difficult to assume that people hunt two such animals at once.

Three in turbans, supposedly Arabs, are trying to thrust spears into a hippopotamus. Dogs also pounce on him. One of the hunters is already defeated. We do not see blood, but for him the hunt is already complete. The dog clung to the crocodile tail, and a middle-aged hunter with a knife in his hands is about to strike this reptile.

Rubens is the founder of a completely new style of painting – baroque. He is incredibly lively and most exciting. The style of the artist is incredibly bright and certainly lush. All the figures he depicted in motion. Shadow and light contrast sharply. This canvas of the artist is no exception. The viewer sees the characteristic style of the painter, which shows through in every detail.

Before Rubens, animals and people were not depicted in the most brutal fights. The artist was carried away far beyond historical reality. Animals and people are fighting with him, and the fight arises absolutely spontaneously. All hunting scenes are incredibly intense. We feel how hot passions are raging on the canvas.

Rubens creates a variety of forms, the combination and merging of which is intended to strengthen the whole drama that is played out before our eyes. The attention of the audience is deliberately transferred not to life, as it may seem at first glance, but to the death of the animals depicted in the picture.