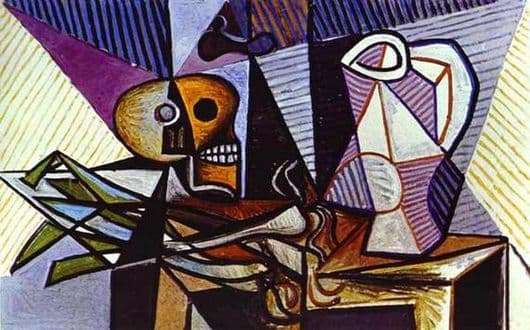 The painting “Still Life” according to the author’s own signature was called “Leek, Skull and Peaches”, and was created in 1945. During this period, the artist creates a number of paintings of this kind, with the same plot, but with the change of some details. Among the pile of all sorts of triangles in the picture, the skull is clearly visible, the more pronounced the more its rounded shapes differ from the surrounding sharpness of the corners.

“Still Life” was written at the end of the war, which impressed the artist so much that he devoted a whole period of his life to her, so called in art – “War.” Guernica. ” And indeed the paintings of this period are dark and gloomy, so in “Still Life” lilac and blue colors prevail, and only the golden skull stands out from the general plan of the picture. But creating a dark center of the picture, as if urging the viewer to look in this direction, Picasso brightened the edges of the canvas, giving them the appearance of diverging sunlight. Apparently such a spelling is not accidental, since the war was already ending, and a bright future loomed ahead, in which there would no longer be skulls and bones, but still lifes would remain.

This picture belongs to a series of three similar pictures, which bear the same names, but have a slightly modified plot, pictures are written at the same time, and in order to somehow divide them, it is customary to introduce a digital division from 1 to 4, since exactly so many pictures under one the general name was written by the artist. He himself dubbed the Devil himself, and therefore, when he was asked questions about why he portrays such depressing embodiment of death in his paintings, he answered that the Devil had nothing more to depict.

In fact, the artist’s life was not as bleak as it seemed to appear from the skull depicted in the picture, since Picasso lived to 90 years and died already in fame, although the real glory still came after his death.