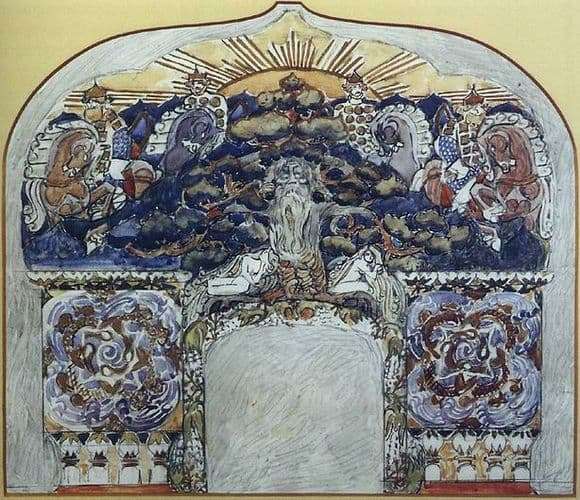 “Mikula Selyaninovich and Volga” – the author’s name of the ceramic fireplace, which Mikhail Alexandrovich Vrubel created for two years. However, the full cycle of its creation dates back to much earlier times.

By order of Mamontov, a prominent artist and collector of the late nineteenth century, Mikhail Vrubel created pictorial panels depicting historical, epic themes, which in turn served as the basis for the ceramic product created later. The picturesque panel is based on the epic tale of Mikulushka and Volga, who met each other during the journey of Volga for a tribute on a princely commission.

Mikula Selyaninovich – a real hero, whose power truly surprises Volga. Naturally, the hero invites Mikula to escort him to that large city where he is to collect tribute. The ceramic fireplace depicts the conversation of two epic heroes, their opposition: the power of Mikula is a gift of the holy land, and the magical abilities of Volga are a supernatural gift.

Watercolor, ink and gouache were used by the master to write an auxiliary sketch. The epic storyline is decorated with ornate patterns, fabulous, colorful ornament. Subsequently, the fireplace itself was decorated in the genre majolica technique. It is known that Vrubel was seriously interested in working with ceramics and was interested not only in its painting, but also in the direct creation, making of a mixture of clay, modeling. At the same time, the fireplace created by Vrubel is distinguished by a special “nationality”, thanks to the epic storyline, the use of folk techniques of making and covering the product, as well as the great spiritual warmth that Mikhail Alexandrovich put into his brainchild.